The egregious behaviour of Prof Sol Andrikopoulos in his press release to global media has obscured the finding that was the primary purpose of the "Three Mouseketeers" study.The study was supposed to answer a question that is actually of great importance in diabetes research:
- the blood sugars of people with diabetes usually improve and can become completely normal on the LCHF diet - this is actually something that has been known for a century or more.
- if you challenge someone who is doing well on the LCHF diet with an oral glucose tolerance test (a sudden large carbohydrate load) their response is often poor.
- is this a physiological adaptation to the diet, or does it indicate a risk of beta cell deterioration (as is usually seen long-term when high carb diets are fed to people with type 2 diabetes)?

The problem with the study, with regard to this question, is:
1) that the NZO mice chosen had a genetic defect, one that has never occurred in humans, which makes them fat-intolerant.
http://www.ncbi.nlm.nih.gov/pmc/articles/PMC1693963/
2) the NZO LCHFD mice gained weight significantly, whereas most overweight humans lose weight on the LCHFD and it is very rare to gain a significant amount of fat mass.

Weight is an important determinant of insulin resistance and glycemic control.

3) there was no deterioration in all 4 parameters of beta-cell morphology in the LCHFD NZO mice despite their weight gain and insulin resistance. 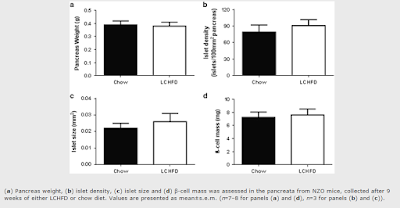 4) the diets were in no way designed to test the Paleo premise, which is that specific Neolithic and refined and processed modern foods have deleterious effects on the human organism, including with regard to weight and glycemic control.

Thus the study was inconclusive on its own terms, and could shed little light on the effect of a LCHFD in humans, and press releases equating its results to the probable effect of a LCHF or a Paleo diet (2 different things) were wholly unjustified.

These remarks and the wide publicity they received amount to unjustified interference in diabetes treatment methods that are working well.

If we take the results at face value, and assume they do apply to humans, it's an interesting exercise.

Most humans with type-2 diabetes told to eat high-starch diets will suffer beta-cell damage in a few years time and require ongoing increases in dose and number of anti-hyperglycaemic medication. These mice gained weight and became insulin resistant on the LCHFD yet didn't suffer beta-cell damage (at least according to the tests chosen by the Three Mouseketeers).
If pre-diabetic mice that become fat and IR on a LCHF diet don't suffer beta-cell damage, maybe humans that lower fat and insulin won't either. Unlike most type 2 diabetic humans on high-carb diets.  I don't see how one could be any worse off, anyway, and at least you'd always be eating the way that exposed you to least excess blood glucose and lowest risk of medication side effects.

As the authors say, "Indeed, there is mounting evidence that initial hypersecretion of insulin in prediabetes contributes to β-cell stress and failure."

If mice were men.

A test that will show healthy blood sugar response in a physiologically insulin resistant person would be a oral protein tolerance test.

Healthy person will show stable blood glucose level after a bolus of fast digesting protein because their insulin and glucagon secretion and sensitivity of the liver will be appropriate.
A T1DM or advanced T2DM will have a glucose spike due to pathological insulin resistance or lack of insulin altogether.

that's right, someone with decompensated diabetes will not tolerate protein - though a recent test with type 1 diabetics showed that the effect was only noticable above 100g, which is a lot of protein. I'm not sure how long they were without insulin though.

How common is significant weight gain on a low carb or paleo diet?

Some self-reported results here suggest it is very uncommon.

There are basically two reasons to carry out an animal study. First, many experiments cannot be performed on humans for ethical or practical reasons. This is not the case in the Melbourne study. Such diet experiments have been performed numerous times on humans and the listed references show the results.

The second reason for doing an animal study, is to compare species responses and determine the extent to which they are similar or different. The results show that the NZO mouse behaves very differently as might be expected. That he did not show the comparison suggests that he didn't understand the principle, or perhaps he was biased.

Thanks! I'll use that in future.

"During preliminary experiments, we observed total growth inhibition and emaciation in [Ecker] rats being fed with the original HFKD for longer than 2 months. Besides these strong side-effects, a high mortality rate was noted after 4 months of treatment (data not shown). To overcome this issue, we elaborated a modification of classical HFKD. The debilitating effects were not observed after the replacement of cellulose with wheat bran."

Not the same debilitating effects certainly, but again, shows it was a poorly controlled study.

It seems suspicious that their results included an 'accumulation of oleic acid' Doesn't thais suggest that the corn oil was very high in the mix compared to the other fats? Note casein there, perhaps likewise innapropriate. The wheat component would been one more layer of confusion and misdirection.

Indeed - one of the refs in the Eker rat paper is

Oleic acid accumulates as a DNL end-product in metabolic fat-accumulation diseases. Pity it's not measured in the UoM paper.

Hi George, are the NZO mice derived from a c57/b6 strain?