Amylin - the "root cause" of diabetes?

When this story broke, I had to look up amylin in my biochemistry (Mathews, Van Holde, Aherne 2000) and physiology (Best and Taylor, 1984) texbooks. Neither has amylin indexed. Nor do I remember any insightful blogs about amylin from the usual suspects recently. Flyin' blind here. Thank God for wikipedia.

What does it mean?

Diabetes is defined as the loss  of beta-cells, so that insulin production ceases - the insulin dependent stage. Interestingly, amylin allegedly plays the same role in type 1 and 2 diabetes, and the aggregates of amylin are amyloid formations similar to those seen in alzheimers. Before you start thinking of type 3 diabetes, though, the amyloids in Alzheimers aren't made of amylin. Amyloid just means "starch-like". What they have in common is beta-sheet protein structures (nothing to do with beta-cells) misfolding in a contagious, prion-like process. 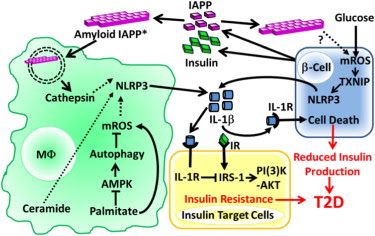 Amylin, AKA Islet Amyloid Polypeptide (IAPP) is a protein produced by beta-cells in tandem with insulin. Insulin promotes glucose uptake and metabolism in cells, amylin slows glucose - and other food - uptake from the gut, by delaying gastric emptying, and decreases appetite; it also seems to be responsible from the switch from muscle glycogenogenesis to adipose lipogenesis, so probably has a role in obesity. According to wiki the ratio is 100:1 in favour of amylin (unless I've read it wrong and it's the other way round). Is the ratio always constant? Does amylin have any independence from insulin? In any case, amylin plus glucose represents a two-pronged approach to preventing systemic over-exposure to glucose; insulin pulls glucose out of, amylin slows access into, the blood.
Some people think amylin should be included with injectible insulin for type 1 diabetics.

Amylin overproduction results in incompleted (proamylin, or proIAPP) molecules being retained in cells; these serve to promote crystalization of further amylin beta-sheets in the cell, the amyloid clumps then initiate apoptosis, killing of the beta-cells with eventual loss of insulin - and amylin - production.

This looks like the end-stage of hyperinsulinaemia; this over-production of amylin (and insulin) is being driven by excess glucose intake, the amylin incompletion and insulin resistance may also indicate an overall micronutrient deficiency, and the out-of-phase insulin response to begin with indicates a) salivary amylase polymorphism, b) presence of excess omega 6 -> PGE2, c) absence of factors inhibiting PGE2, e.g. omega 3, CLA (the most likely reason for the diabetes-protective effect of dairy fat, or, if you don't eat dairy, ruminant fats).
Note that PGE2, an omega 6 series prostaglandin, inhibits glucose uptake, and to a somewhat lesser extent fructose, in sheep, but increases it in rats - probably the better model for human response. If this is the case, PGE2 is increasing glucose uptake as it decreases first phase insulin response, which is already diminished in individuals with fewer salivary amylase gene copies. The compensatory rise in second phase insulin response - exacerbated by 12-HETE, an omega 6 series eicosanoid - results in a larger area under the curve for both glucose and insulin; i.e., in hyperglycaemia and hyperinsulinaemia.

It is interesting that this hyperinsulinaemia-related problem with amylin is also causative in type 1 diabetes. It means that lower carb diets can be recommended to those at risk of this disease.
The T1D connection is really interesting. .I have a friend who is T1 diabetic; he said when he was 12 he got a craving to eat dry Milo (Nestles chocolate flavoured drink sweetened with maltose, i.e. glucose), ate a big tin of it in one day, crashed into a coma and woke up in hospital on insulin. That seems to show pronounced hyperinsulinaemia immediately preceding beta-cell burn out. Perhaps a combination of sudden hyperinsulinaemia from an inflammatory, infective, or autoimmune cause together with a low tolerance for amylin production.

Both insulin and amylin contain disulfide bridges (Cys-S-S-Cys) and this is interesting as the bridges are only meant to form outside the cell (the peptide is expressed as a string from the reducing environment of the cell, where the cysteine residues exist as 2x Cys-S-H, into the more oxidising serum enviroment, where the sulfur bonds snap together as the cysteine residues are oxidised to Cys-S-S-Cys plus H2O). If insulin output is very high, this puts a heavy demand on the reducing systems of the cell; glutathione, glutathione reductase, thioredoxin reductase and so on. Hydrogen sulfide - H2S - is also protective in the beta-cell for some reason. These are mostly selenocysteine enzymes, and selenocysteine is also required for a protein folding enzyme. (note though, supplying 200mcg Se as selenomethionine in America, not overall a selenium deficient country, has been associated with double the rate of diabetes in one study that was not directed at glycemic endpoints).

Here is the Wiki page on amylin. It's interesting, has the background to the latest research, and I wonder why we never hear about this hormone in diet-health discussions? I guess that from now on we will be hearing more of it.
http://en.wikipedia.org/wiki/Amylin

The take home - keep insulin production under control by counting carbs and avoiding vegetable seed oils, and amylin should tag right along, ensuring beta-cell function lasts a lifetime.
Posted by Puddleg at 15:59

Email ThisBlogThis!Share to TwitterShare to FacebookShare to Pinterest
Labels: Amylin and diabetes

Thanks for the interesting post. Lots to look at.

Ah, I was left with more questions then answers reading the Herald article yesterday. Your explanation makes a lot of sense. Thanks!

Thanks Charles.
It looks as if amylin is the weak link of the insulin response; the part of the cascade most likely to break the whole mechanism under pressure.
And it's also interesting in its own right. Newly discovered, what misunderstandings have been the consequences of its over sight?
We will surely be misunderstanding insulin if we have only used insulin injections or infusions as our models for glucose response. What is the amylin resonse curve compared to insulin?
Here's what happen to amylin on metformin
http://www.ncbi.nlm.nih.gov/pubmed/10337452

"With the respect to the trophic effect of amyloid deposits in the pancreatic islets and to a hypothetic effect of amylin increasing insulin resistance, the present results emphasize the particular usefulness of metformin in the pharmacological treatment of NIDDM."

The paper seems to say that over-expression of amylin causes insulin resistance (which figures). Are humans with T1D hemizygous for amylin, as the mice were?
Anyway, amylin can be "unyoked" from insulin at least with regard to ratios by these polymorphisms.

I'm most interested in the potentially leptin-sensitizing effect of amylin... http://www.ncbi.nlm.nih.gov/pubmed/20413324

Human study on metreleptin, pramlintide, or both: http://www.ncbi.nlm.nih.gov/pubmed/19521351

This confirms the wisdom of Richard K. Bernstein and the VLC diet for type 1 diabetes. The less insulin one needs, the less effect the absence of amylin is going to have.
It also means that insulin supplementation in type 2 diabetics will preserve the remaining beta-cells (by them not being over-worked). Not as well as avoiding carbs, maybe, but still a rational way to protect the pancreas.

Nice post George. Bill's point is key. Insulin and amylin linkages point out why Guyenet is wrong about his view of leptin and insulin in the brain.

The protein folding is is a huge clue that the redox potential is the key in diabetes. I have been talking about that in my current series using prions as the model analogy.

Same plaque as found in the brain in Alzheimer's?

I saw one link that said that D3 might help break up the plaque, what do you think?

Remember the article about omega-6 in the brain of those with Alzheimer's from Peter's blog?

It looks like there are good and bad processes that remove amyloid, that is, amyloid may be protective or neutral if you don't resolve the underlying issue - if you do, it goes away, but if you just target amyloid by itself, this seems to do no good.
I imagine D3 inhibits the arachidonic acid inflammatory pathway, for one thing.

Reading more about amyloid plaque, I don't know how vitamin d could untangle it, but I don't know.

This study claims that amylin is the dangerous substance, and that copper is the antioxidant.

What do you think of the possibility of glp-1 reversing both diabetes and alzheimer's?


Theories on how GLP-1 can prevent beta cell apoptosis, and possibly cause beta cell regeneration and proliferation:


GLP-1 has been documented to induce neurite outgrowth and to protect against excitotoxic cell death and oxidative injury in cultured neuronal cells.

GLP-1 is a response to feeding, like somatostatin 28, and the levels of these hormones might be adjustable by diet, with long--term beneficial effects.

I've seen that the bitter taste/bile can activate it.

I never realized how important the hormones in the duodenum were until very recently.

I am not positive I have this right, but it looks as though DDP-IV is antagonistic to glp-1, which might explain why people getting off gluten and dairy lose weight so effortlessly.

Hi Betsy, I've seen many explanations for this, including effects of gliadin and casein on insulin and leptin signalling.
Indians swear by bitter melon for preventing diabetes.
https://en.wikipedia.org/wiki/Momordica_charantia