When this paper stumbled across my desk the other day my first thought was of course "Aha! Linoleic acid not so hot, this explains lack of benefit in RCTs as analysed by Steve Hamley".[1]


I still think, maybe it does - once there's a pathology in the house, which was often the case in those RCTs - but I can think of an alternative explanation, connecting this paper with my previous post.

It's not obvious why MUFA (oleic acid is the only MUFA ever worth considering, which is odd given the diversity of saturated fats and their effects) should be bad for reverse cholesterol transport. It's in everything that supplies SFA in, overall, comparable amounts, and is 60% of your adipose fat.
Unsaturated Fatty Acids Reduce Cellular ABCA1—Because
ABCA1 controls the rate of apoA-I-mediated lipid efflux, we
assayed the effects of fatty acids on the cell membrane content
of ABCA1. Incubating cells with unsaturated fatty acids caused
a significant decrease in membrane ABCA1 (Fig. 4A). In contrast,
saturated fatty acids had no or little effect on ABCA1
levels. As with lipid efflux, oleate and linoleate reduced ABCA1
membrane protein in a concentration-dependent manner (Fig.
4B). We compared the effects of stearate and linoleate on the
plasma membrane content of ABCA1 by treating cells for 6 h
with fatty acids, biotinylating cell-surface proteins, isolating
ABCA1 by immunoprecipitation, and assaying for biotinylated
(cell-surface) ABCA1 with a streptavidin probe. Results
showed that linoleate, but not stearate, reduced both the total
and plasma membrane content of ABCA1.

Nutritional studies have shown that different fatty acids
have diverse effects on lipoprotein metabolism. It is believed
that substituting dietary saturated fatty acids with cis-unsaturated
fatty acids protects against cardiovascular disease by
lowering plasma LDL levels (reference is Hu et al the way to Willett, 1997).
Our results suggest that,
although reducing atherogenic particles, these dietary manipulations
may suppress cholesterol efflux from macrophages.
This may partially explain why a meta-analysis of clinical
trials showed only a small cardiovascular risk benefit with
modified dietary fat intake.(Ref is Hooper et al, 2001) 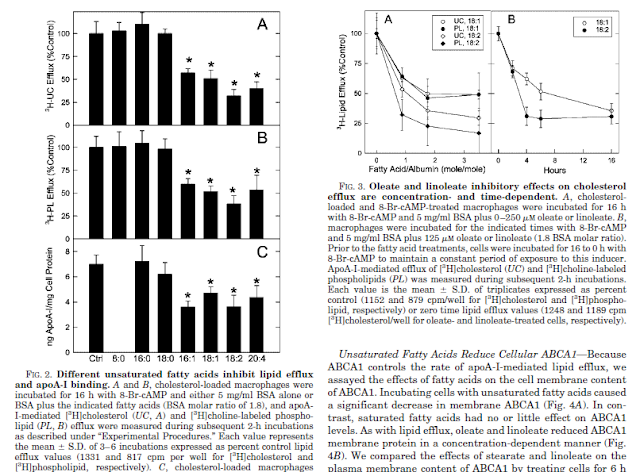 But think - what is the use of this? Remember the last post - UFAs promote fat storage, SFAs do not.
If the macrophage is storing fat, it needs to retain some cholesterol; if it cannot store fat, because all the fat is SFA and mammalian cells cannot synthesise a TG from 3 SFAs, it might as well release cholesterol normally.
That's what I think is going on. Of course, if the macrophage is always storing fat and cholesterol because glucose and insulin are always high, that's part of the pathology (excess lipid droplet formation leading to creation of foam cells), and functionality will be impaired by UFAs in the manner described in this paper as regulation fails to keep pace with overactivation, but we also have to think of every cell in the body as not only performing a function but also as an obligate consumer of the body's different fuels. Even macrophages need something to eat, and even macrophages might want to put a little aside for later when there's a lot on the plate.
An additional question is whether macrophages synthesise cholesterol from LA, as hepatocytes do.

I like the way these authors understand CVD as a disease of cholesterol retention, rather than excess LDL per se. This is a view often kicked to the kerb by those who only have LDL-lowering meds to sell. The European Heart Journal, for example, seems to publish an editorial bashing HDL every other week. We get it, HDL is not a drug target, and not much of a genetic lottery either, but it is still a part of the system nature supplied to regulate the accumulation of cholesterol in cells, and worth making friends with.