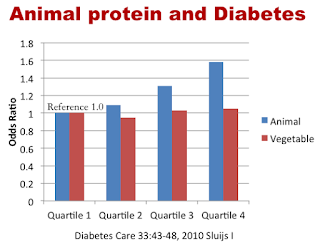 The upper protein quartile ate fewer calories, were more active, and had significantly higher BMI (2 points) and waist circumference (4cm).
In other words, either this study breaks the sacred rules of diet thermodynamics, or diet was not reported accurately.
The quartile who ate least vegetable protein had to have eaten more animal protein than the others, just to survive. So why is their risk of diabetes so low?
Posted by Puddleg at 14:24 2 comments:

It's a long story, and not a proud one. Seeing an email in my inbox from the Journal of Diabetes & Metabolism, which seemed like the title of a journal I'd investigated earlier, I impulsively sent off a draft of my history of Louis "Harry" Newburgh and the Michigan diet. I just emailed the unformatted pdf to them, and never engaged any portal or website.
The journal replied, in terrible English, that my article would be accepted with changes requested by one of "two reviewers" supplying a short paragraph each. This request was that I shorten and focus the abstract, and format references.
At this stage I realised this was an OMICs journal, of predatory reputation. I sent off the formatted article with no change but a small edit to the abstract to see what would happen.
The next thing I knew, I was sent an author proof. And an invoice for US$4,000. For some reason the illustration of Newburgh had been titled as being of Frederick Allen, a name which appears in the text but was never attached to any picture. I corrected this and received an authorproof with errors corrected.
Here is this proof, which I consider to be an accurate version of the paper, albeit I believe it was not properly peer-reviewed.

I never paid the fee, and received numerous reminders, not all addressed to me. I still receive emails from other OMICs journals requesting my input. I was never asked to sign a COI declaration of any sort, nor any other agreement (the work is Open Commons). I had read a thread on researchgate in which an author describes seeing their work published despite not paying the fee.
https://www.researchgate.net/post/Can_I_trust_OMICS_publishing_group

Not only is the picture of Newburgh captioned Frederick Lewis Allen 1932, the references in the HTML version (but luckily not the pdf) are imported from some other paper, probably from a different journal.
I feel like this is a punishment to make an example of defaulting authors!

Anyway, the history of Newburgh is published, which is the main thing, but I feel ethically unclean, and whether anyone can ever now cite this article in a proper paper is uncertain. At least OMICs have not claimed exclusive rights in the matter, so republication is not out of the question. But then, if I'd thought this necessarily detailed history would be easy to publish in a proper journal, it would never have ended up in the hands of OMICs.

I'd like to thank Ash Simmonds and Zooko for introducing me to the work of Prof Newburgh.