Will a ketogenic diet increase the risk for malignant melanoma?

It's well-known that ketogenic diets reduce the growth of some cancer types in humans. These are early days for learning which cancer types are most vulnerable, which diet is best, and what the mechanisms are; Warburg had a clue, but the Warburg effect is far from the whole story.

On the other hand, there are cancer types that may not respond to a ketogenic diet. Prostate cancers seemed a likely candidate, because there is an inverse correlation with type 2 diabetes, but in animal models a ketogenic diet improves survival.[1]

But recently some U.S. researchers have provided evidence that acetoacetate accelerates the growth of an important type of malignant melanoma, cells with a BRAF V600E mutation.[2] 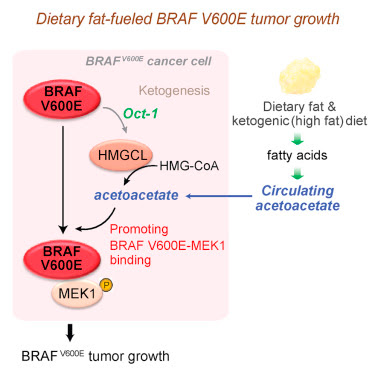 I have some issues with this - firstly, that "Dietary fat promotes ketogenesis to enhance BRAF V600E tumor growth." Dietary fat will only do this in a ketogenic diet. It doesn't take much carbohydrate and/or extra protein to stop it. Fasting or a very low calorie diet will promote ketogenesis too; the rate of oxidation of fat when you skip carbohydrate and restrict protein is exactly the same as when you don't eat, except that ketone levels stay lower over the longer term. So if ketone bodies from fat oxidation promote melanoma, fasting should be worse than a ketogenic diet.

Obesity and type 2 diabetes are conditions that suppress ketogenesis and make it hard to get into ketosis. They are the opposite of fasting. They should be protective against malignant melanoma; they're not. However, the relationship is weak and inconsistent, which might show some effect, countering the usual pro-cancer mechanisms in these conditions.
Type 1 diabetes is a condition that frequently exposes people to high ketone levels. Type 1 diabetes seems to be inversely, but non-significantly correlated with melanoma in Sweden, standardized incidence rate of 0.8 (0.5 to 1.1).[3]

This evidence doesn't refute the ketone-melanoma link in humans, and it doesn't relate to ketogenic diets, but it does show that there are many influences on melanoma (deficient vitamin D3 and hyperleptinaemia, and glutamine as a fuel, appeared in a cursory search) that might swamp the ketone effect.

One of the findings in the latest study was that cholesterol increased in the mice on the ketogenic diet. This is presumed to deliver more lipid to cells. Prostate cancer cells upregulate the LDL-receptor to take in more lipid. and the function of this is to take in more omega-6 fatty acids to make prostaglandins which promote tumour growth.[4] This is relevant to the present case because polyunsaturated fatty acids are especially ketogenic; however, the fat used in this experiment was a mixture of 1 part corn oil to 6.5 parts Primex, which is "pure vegetable shortening, a mixture of partially hydrogenated soybean and palm oil". None of these are fats that anyone on a ketogenic diet would use, and all, it turns out, are contaminated with carcinogens. However this would have had little effect in the context of this experiment.

This dodgy version of a ketogenic diet did not increase tumour size in the mice with the alternative malignant melanoma mutation. 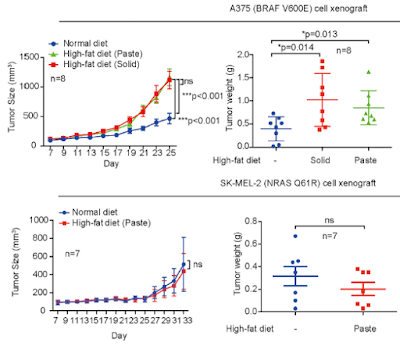 It may be that polyunsaturated fatty acids can promote ketogenesis more easily than other fats in cells that don't normally produce ketones:

This paper summarizes the emerging literature indicating that at least two polyunsaturated fatty acids (PUFA; linoleate, alpha-linolenate) are moderately ketogenic and that via ketone bodies significant amounts of carbon are recycled from these fatty acids into de novo synthesis of lipids including cholesterol, palmitate, stearate and oleate. This pathway (PUFA carbon recycling) is particularly active in several tissues during the suckling period when, depending on the tissue, >200 fold more carbon from alpha-linolenate can be recycled into newly synthesized lipids than is used to make docosahexaenoate. At least in rats, PUFA carbon recycling also occurs in adults and even during extreme linoleate deficiency.[5]

We have many thousands of people around the world using various types of ketogenic diets or fasting, some for a very long time (lifetimes in the case of some people with pediatric epilepsy), and a large proportion of them nowadays are relatively sceptical about sunscreen. There are no case studies of melanoma in such people that I could find, and I have come across no reports in many years on social media.
This is not to say that a ketogenic diet or fasting is a treatment option for BRAF V600E melanoma, this is I think good enough evidence to decide that it's probably not. However, it's likely that other benefits of keto diets and fasting, viz. improved insulin and leptin status, decreased inflammation, lower glutamine, improved vitamin D status, hormetic antioxidants, avoidance of refined oils and a good omega 3:6 ratio, etc. decrease all the other changes that lead to a tumour's appearance in the first place.
Edit 20-01-17

The research I cited here has received ample funding from an impressive array of sources, but not all ketone-and-cancer research receives public funding. Thus E.J. Fine and R.D. Feinman are now crowd-sourcing funding for a simple experiment, certainly much less expensive than the one above, which is testing the effect of acetoacetate on a variety of different cancer cell types and looking at the metabolic pathways associated with response and non-response, specifically those that control ROS generation and cytotoxicity.
Our 28 day pilot human trial of 10 subjects with advanced cancers on a very low carbohydrate ketogenic diet (KD) was publilshed in Nutrition (Elsevier) in 2012. Patients with the greatest extent of ketosis had stable cancers or partial remission, while those with the least ketosis showed continued progressive cancer.
Including this case: (H/T Scott, see comments.)

"It is also noteworthy that the best response to a KD in the study by Tan-Shalaby et al. [17] was seen in a patient with BRAF-V600 positive stage V melanoma who stayed tumor-free after surgery and a prolonged KD at 131 weeks of follow-up.”

In cell culture studies we published that ketone bodies (KB) inhibited growth of 7 different cancers from 20-50%, leaving normal cells unaffected.
Despite a favorable editorial & the Metabolism Award, our proposal to scale up to 65 patients & extend our cell culture work was rejected by the NIH/NCI, as they are committed to drug therapy. We appeal now to people who are interested in supporting promising dietary cancer research.

You can donate here https://experiment.com/projects/part-2-can-low-carbohydrate-ketogenic-diets-inhibit-cancers or support the project by buying a cool T-shirt here.
https://www.booster.com/support-research-on-ketogenic-diets-for-cancer2

Email ThisBlogThis!Share to TwitterShare to FacebookShare to Pinterest
Labels: Keto diet and melanomaa

Scientific Fraud, in the Abstract

Someone posted this scare story from November in the Low Carb and Paleo group on Facebook.
Luckily I missed it at the time as I was busy with arguably more important things, but being on holiday now I think it warrants a little attention.
It was an abstract - that's all for now - presented at a conference of the American Heart Association, based on data from the WHI study (Womens' Health Initiative - the follow-up from the huge, long-term study where lowering saturated fat in the diets of women seemed to cancel out all the expected benefits from improving carbohydrate quality and reducing trans fat intake).

NEW ORLEANS, Nov. 14, 2016 — Women over the age of 50 who follow a high-protein diet could be at higher risk for heart failure, especially if much of their protein comes from meat, according to preliminary research presented at the American Heart Association’s Scientific Sessions 2016.

Researchers evaluated the self-reported daily diets of 103,878 women between the ages of 50 and 79 years, from 1993 to 1998. A total of 1,711 women developed heart failure over the study period. The rate of heart failure for women with higher total dietary protein intake was significantly higher compared to the women who ate less protein daily or got more of their protein from vegetables.

While women who ate higher amounts of vegetable protein appeared to have less heart failure, the association was not significant when adjusted for body mass.

None of these press releases (there were others) linked to any paper, but a bit of searching brought up the actual abstract in a doc.x format.

It says
Results: Among 103,878 women in the study sample, 1711 women developed HF through 2005. Incremental biomarker calibrated dietary protein consumption was associated with an increase in the risk for Heart Failure. An inverse association was found between higher intakes of energy adjusted vegetable protein and HF although this association wasn’t statically [sic] significant if the association was adjusted to BMI and diet quality. 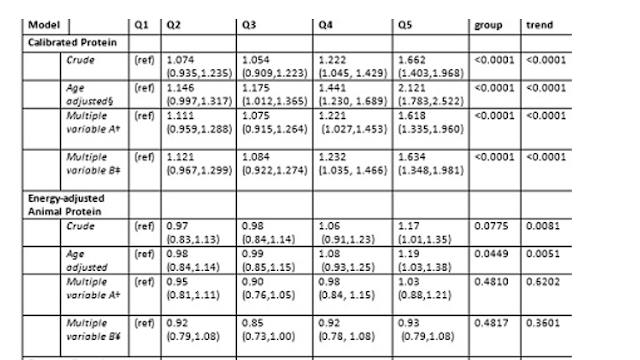 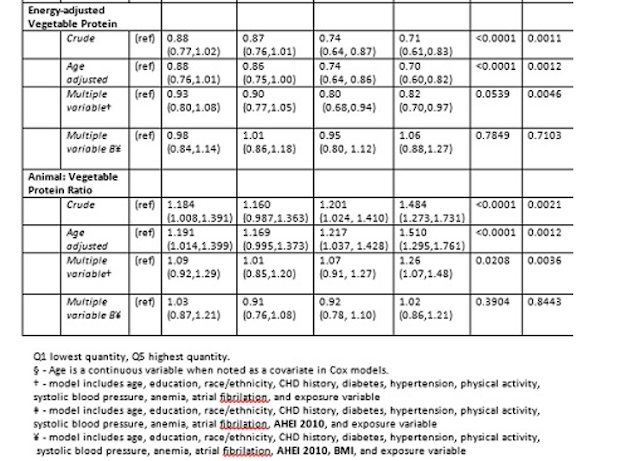 What about total protein? This set of results is not adjusted for BMI
This matters because heart failure, as a disease of ageing, may be associated with poor appetite, which would tend to increase the protein percentage of the diet. The same is true of heavy drinking, a known cause of cardiomyopathy and heart failure. Overweight also increases the risk of heart failure, as shown by this Mendellian randomisation study.

The results show that an increase of one unit of BMI increases the risk of developing heart failure by an average of 20 per cent.

If that's so, then a high protein, low carb diet would reduce the risk. Mechanistically I can't think of a reason why protein would cause heart failure, and none is mentioned in the abstract. Ketone bodies, a product of protein metabolism even on a high carb diet, are the preferred fuel of cardiac muscle.

In any case, adjustment for BMI is essential, and so is adjustment for diet quality (especially the B vitamins essential for the metabolism of amino acids). Vitamin deficiencies are associated with heart failure, which makes sense mechanistically, and the AHEI 2010 score is one of the diet quality algorithms, confounded by concepts of virtue (it would be better if it focussed on essential nutrients in this case).
Do that, and there's obviously nothing to see.


But even when there's nothing to see, there are plenty happy to report it, as long as it fits the plant-based bullshit bias of the health-reporting media and the AHA.