In trying to explain the findings of Newburgh and Marsh*, and of Karl Petren, from 1923 that switching to a high fat, restricted protein, and very low carbohydrate diet - a ketogenic diet - suppresses diabetic ketoacidosis (DKA) in diabetics without access to insulin, I can't help noticing that gluconeogenesis is a driver of ketogenesis. DKA is a dehydrating syndrome characterized by hyperglycaemia, due in large part to runaway gluconeogenesis, plus levels of ketone bodies, much higher than those seen in starvation or nutritional ketosis, which result in a lethal acidosis. And excess glucose and excess ketones are linked metabolically.

Remember the old saw, that fat burns in a carbohydrate flame? Laugh all you like, but this is true. And it is even more true when the flame is taken away - when carbohydrate (glucose) is being stolen from mitochondrial metabolism. Gluconeogenesis involves a direct loss of oxaloacetate from the citric acid (Krebs, TCA) cycle. Without this oxaloacetate, the fat-burning flame sputters; the smoke that escapes from incomplete combustion is the ketone bodies. I'm not a chemist, but this seems to me a pretty certain way of interrupting the TCA cycle. And a very convenient one in evolutionary terms; at times when you need endogenous glucose, you can use a few extra ketones as well. 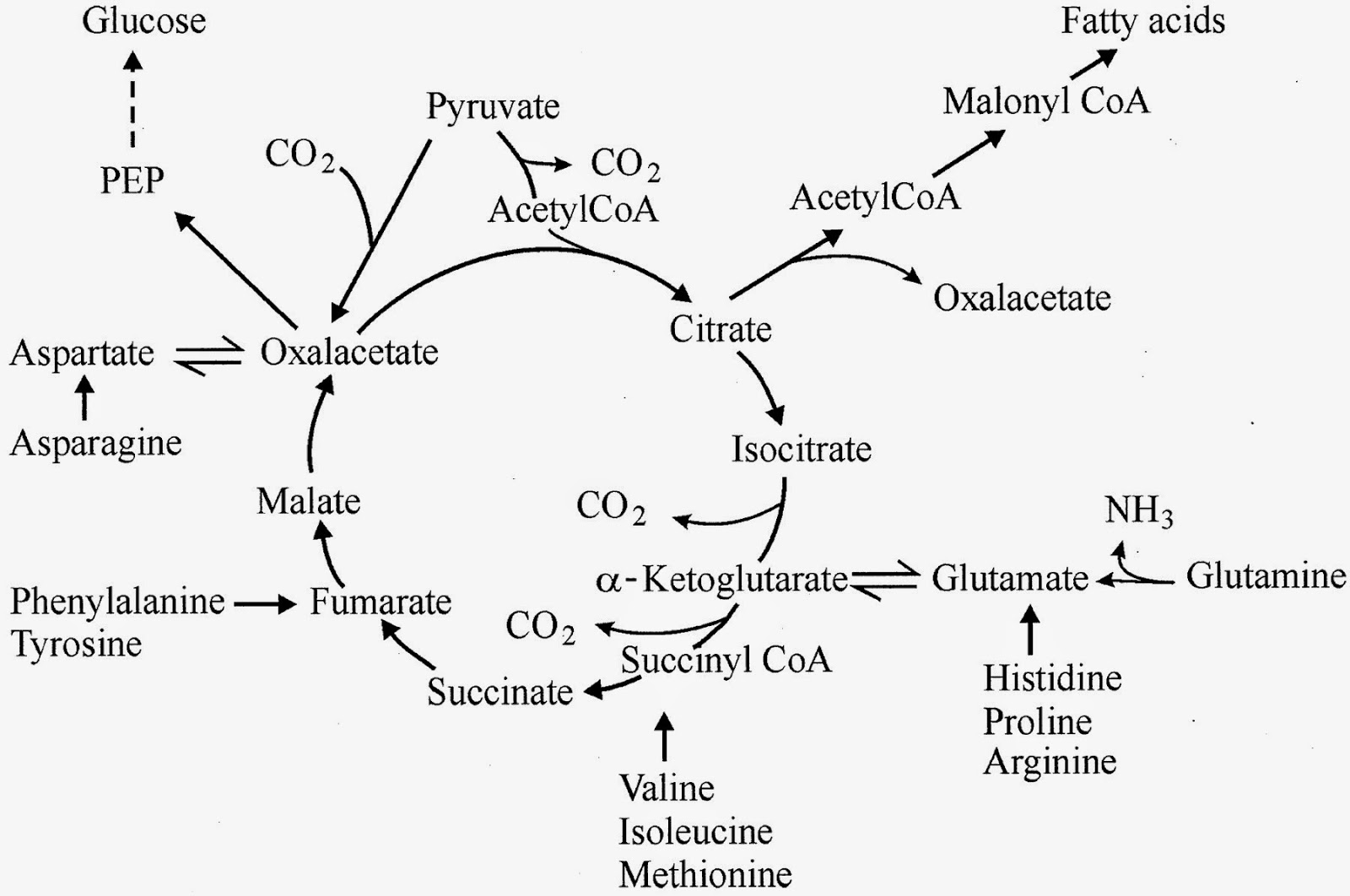 
[In Starvation] degradation of fatty acids in the liver proceeds more rapidly than usual, with augmented production of of acetoacetyl-CoA and acetyl-CoA and their products.
In addition there is a deficit of oxaloacetate and thus a decrease in formation of citrate.
The low level of oxaloacetate is further accentuated because it is being utilized for gluconeogenesis.
This further impairs operation of the citric acid cycle.

Ketosis incident to starvation is most frequently encountered clinically in gastrointestinal disturbances in infancy or pregnancy. Other circumstances in normal individuals in which excessive lipid and diminished carbohydrate are being metabolised may also lead to ketosis, e.g. renal glycosuria and abrupt replacement of a normal diet by one low in carbohydrate and very rich in lipid.

Clinically, the most important cause of ketosis is diabetes mellitus. In the diabetic individual, in contrast to the above situations, glucose is present in excessive amounts in the fluids of the body; however, the metabolic defect, viz., insulin deficiency, prevents glucose utilization from operating at a normal rate. From the point of view of the effect upon lipid metabolism, diabetes and starvation resemble one another.

In diabetic individuals with severe ketosis, urinary excretion of ketone bodies may be as high as 5,000mg/24 h and the blood concentration may reach 90mg/100ml, in contrast to normal values of less than 125mg and less than 3mg respectively.

So what happens when a diabetic without insulin eats carbohydrate or excess protein?
As we saw in earlier posts, glucagon is released from pancreatic alpha cells in response to carbohydrate and protein. This elevates gluconeogenesis in the liver. Blood glucose is elevated by the meal and by GNG, and hyperglycaemia itself increases hepatic GNG further. Lipolysis is increased by the glucagon, so the liver has additional fatty acids to metabolize. Perfect conditions for ketogenesis to be enhanced above normal levels, because oxaloacetate is being extracted from the TCA in record amounts as this fat is being burned.

What happened when diabetics, in acidosis and without insulin, were switched to the Newburgh and Marsh ketogenic diet in 1923?
With no glucose and minimal protein to trigger glucagon, hepatic GNG is lower. With no glucose to add its load to hyperglycaemia, there is less portal hyperglycaemia to additionally drive GNG.
Less GNG = less ketogenesis.
And, as a bonus, it is likely that dietary fat has an inhibitory effect on lipolysis that is independent of hormonal controls. As long as it's saturated, or not polyunsaturated - in 1923, endocrinologists favoured butter as a source of fat.

Dr Bernstein describes the mechanism of DKA differently; he doesn't consider that the liver is the main source of ketones, or that gluconeogenesis drives ketogenesis. His description addresses the pathology of DKA well, but not I think the early links in the chain of causality. Perhaps the difference is that he is describing the failure of insulin to work, and I am describing the long-term absence of insulin. But we are both agreed; dietary carbohydrate is the cause of DKA in diabetics.

"Furthermore, the higher your blood sugars go, the more insulin resistance you will experience. The more insulin-resistant you are, the higher your blood sugars are going to be.
A vicious circle. To make the circle even more vicious, when you have high blood sugars, you urinate—and of course what happens then is that you get even more dehydrated and more insulin-resistant and your blood sugar goes even higher. Now your peripheral cells have a choice—either die from lack of glucose and insulin or metabolize fat. They’ll choose the latter. But ketones are created by fat metabolism, causing you to urinate even more to rid yourself of the ketones, taking you to a whole new level of dehydration."
See also http://www.diabetes-book.com/ketoacidosis-hyperosmolar-coma/
and http://www.diabetes-book.com/diabetes-dehydration/

Edit: here's a bit more on starvation, from this book
After about 3 days of starvation, the liver forms large amounts of acetoacetate and d-3-hydroxybutyrate (ketone bodies; Figure 30.17). Their synthesis from acetyl CoA increases markedly because the citric acid cycle is unable to oxidize all the acetyl units generated by the degradation of fatty acids. Gluconeogenesis depletes the supply of oxaloacetate, which is essential for the entry of acetyl CoA into the citric acid cycle. Consequently, the liver produces large quantities of ketone bodies, which are released into the blood. At this time, the brain begins to consume appreciable amounts of acetoacetate in place of glucose. After 3 days of starvation, about a third of the energy needs of the brain are met by ketone bodies (Table 30.2). The heart also uses ketone bodies as fuel.

And diabetes:
Because carbohydrate utilization is impaired, a lack of insulin leads to the uncontrolled breakdown of lipids and proteins. Large amounts of acetyl CoA are then produced by β-oxidation. However, much of the acetyl CoA cannot enter the citric acid cycle, because there is insufficient oxaloacetate for the condensation step. Recall that mammals can synthesize oxaloacetate from pyruvate, a product of glycolysis, but not from acetyl CoA; instead, they generate ketone bodies. A striking feature of diabetes is the shift in fuel usage from carbohydrates to fats; glucose, more abundant than ever, is spurned. In high concentrations, ketone bodies overwhelm the kidney's capacity to maintain acid-base balance. The untreated diabetic can go into a coma because of a lowered blood pH level and dehydration.

Note for future research: Mammals can synthesise oxaloacetate from pyruvate, but what if this step depends on insulin (which suppresses ketogenesis) and the conversion of pyruvate to acetyl-CoA doesn't?
The diabetic hepatocyte is swamped with glucose, it can't resist metabolising it, and 65-85% of the carbon from this glucose is recycled as GNG glucose.
What if this glucose, without the guiding hand of insulin, is, like fatty acids, a poor source of oxaloacetate and a good source of acetyl-CoA? After all, its metabolism is not suppressing ketogenesis - the opposite seems to be true.
Ketone bodies for use by heart muscle in normal hepatic metabolism are produced from glycogen, according to the first text I quoted.
So - is glucose itself a ketogenic substrate under certain conditions?
The quest continues...
Posted by Puddleg at 16:45 21 comments:

The Guinea Pig Model of Atherosclerosis

This is the kind of research that doesn't get as much attention as it used to.
Animal models are vital ways of testing theories that it would be unethical to test on humans, and when theories or novel chemicals are tested on unsuspecting humans, we refer to those humans as "guinea pigs". Not mice, rabbits, rats or any other rodent, but cavia porcellus. The guinea pig was used by Lavosier to demonstrate, by melting snow around his calorimeter, that respiratory gas exchange is a combustion, and by Pasteur, Roux, and Koch in their germ experiments, but fell into neglect at the end of the 20th century: only 2% of laboratory animals in the USA are currently guinea pigs.

In the early history of the lipid hypothesis, the rabbit model of atherosclerosis was developed by Anitschkow in 1911:

"When fed fat and cholesterol, rabbits develop high TC levels and subsequent fatty deposits in their blood vessels. When cholesterol is taken out of their diet, TC levels generally reduce and the fatty deposits may regress. If not used as conclusive evidence as to the process in humans, such experiments are said to be supportive of the theory that under conditions of high TC, cholesterol is more likely to be deposited in human arteries."[1]

The amount of cholesterol fed in these experiments - 0.2% or 0.25% of dry matter - probably exceeds what a human could consume, and of course rodents in nature have a minimal exposure to dietary cholesterol. The lesions seen do not correspond exactly to human atherosclerosis, and the role of saturated and unsaturated fats, or of foods like butter, with regard to progression in rabbits does not always match the lipid hypothesis predictions.

In 2006 Maria Luz Fernandez and Jeff Volek published a paper which should have stirred things up:
"Carbohydrate restricted diets have been shown to reduce plasma triglycerides, increase HDL cholesterol and promote the formation of larger, less atherogenic LDL. However, the mechanisms behind these responses and the relation to atherosclerotic events in the aorta have not been explored in detail due to the lack of an appropriate animal model. Guinea pigs carry the majority of the cholesterol in LDL and possess cholesterol ester transfer protein and lipoprotein lipase activities, which results in reverse cholesterol transport and delipidation cascades equivalent to the human situation. Further, carbohydrate restriction has been shown to alter the distribution of LDL subfractions, to decrease cholesterol accumulation in aortas and to decrease aortic cytokine expression. It is the purpose of this review to discuss the use of guinea pigs as useful models to evaluate diet effects on lipoprotein metabolism, atherosclerosis and inflammation with an emphasis on carbohydrate restricted diets."[2]

Rats and rabbits, on the other hand, don't resemble humans in the way they disburse lipids. The LDL fraction is tiny, they lack CETP and lipoprotein lipase, and generally diverge from human measurements in ways guinea pigs, it seems, don't. Even though rabbits and guinea pigs have pretty much the same natural diet - grasses, and their own poop. Guinea pigs and humans, unlike rats and rabbits, also can't synthesise vitamin C. Is there an orthomolecular connection here?
Long story short, guinea pig lipids react to lipid lowering drugs, PUFA and fibre in the same way and via the same mechanisms that produce effects in humans. If you feed a guinea pig cholesterol, fat, and carbohydrate it gets atherosclerosis. If you feed the guinea pig a very low carbohydrate diet (20%E SFA in these experiments - 10%CHO,65%FAT,25%PRO ) it's protected from cholesterol-induced atherosclerosis and inflammation. If you feed it a low-fat diet (55:20:25) the atherosclerotic syndrome progresses [3].

Researchers at our laboratory and other investigators have found that guinea pig cholesterol metabolism does indeed have some analogies to human cholesterol metabolism that merit discussion.
Some of these similarities include the following:
7. They require dietary vitamin C (Sauberlich 1978).
8. Females have higher HDL concentrations than males (Roy et al. 2000).
9. Ovariectomized guinea pigs have a plasma lipid profile similar to that of postmenopausal women (Roy et al. 2000).
10. During exercise in guinea pigs, plasma triacylglycerol (TAG) decreases and plasma HDL cholesterol (HDL-C) increases (McNamara et al. 1993).
11. Guinea pigs respond to dietary interventions (Fernandez and McNamara 1992b, 1992a and 1995a, He and Fernandez 1998a) and drug treatment (Berglund et al.1989, Hikada et al. 1992) by lowering plasma LDL cholesterol (LDL-C)

What we have here is a story of good science that should be better known. Maria Luz Fernandez develops the modern guinea pig lipoprotein model, Jeff Volek recognises its value for testing the carbohydrate hypothesis of atherosclerosis and the safety of LCHF diets, and Fernandez sees the value of such testing in adding to our knowledge of cardiovascular disease and lipid and carbohydrate contributions to inflammation. 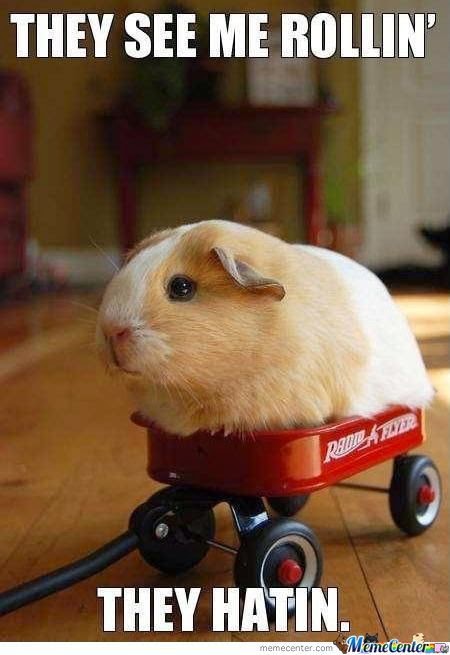