Probiotic extracts for PTSD - proof of concept for the gut-brain axis?

It is with great pleasure that I can announce results from an experiment I was actually involved with, albeit long ago.

It happened like this - having noticed that probiotics were helping with my HCV symptoms, I was theorising about the reasons for this in a Hep C forum with nurse Silvia H, who supplied a lot of my early background on immunity; this attracted the notice of Elizabeth McKenna, who was working with Beth Jones, the senior author of the present paper. Dr Jones had invented a process for producing a cell wall lysate from bacteria that, or so it was claimed, preserved the probiotic immune function to a far greater extent than other lysates and heat-killed probiotic products then available.

I knew a bit about these products because a friend with HCV swore by a product called Del Immune V, which had corrected what seemed to be autoimmune symptoms. I tried this product but to be honest was already so saturated with effective herbs and other supps that I couldn't honestly say what it did, though it did appear to be something. But by looking on the interwebs, as they then were, I could deduce a bit about such things.

My theory was, still is, that commensal bacteria - as well as herbs like astragalus and some mushroom sp. produce polysaccharides and other PAMP signaling molecules that mimic LPS in a benign way. An agonist-antagonist relationship with PAMP receptors could explain this modified version of the effect (this is why it can be useful having a druggie on the board, pharma execs). This summary minimizes the amount of reading I did on complement and alternative complement pathways, Tregs and Th17, retinoid metabolism and immune cell differentiation, dendrite cell translocation of LPS, and other things that mercifully I only faintly remember now. Anyway, it looked as if the toll-like receptors, a major PAMP recognition pathway, were important.

Elizabeth McKenna, by now the CEO of Labyrinth holdings overseeing the patent process for Dr Jones, had the realization that TLR activity was assayable - the tests were done and, as in the current paper, there was significant activity at several PAMP receptors.

Soon after I received some test samples of the product, now called ReseT. From Reset T cells - a good concept but as it turned out a very poor name when it came to finding the product in search engines!

Anyway, at the time I still had HCV, and that was one possible use for ReseT, so I thought I should try it. Even though at the time my symptoms were under control and I had no idea if I would notice, because that's how I roll, someone has to try things and I was already implicated, as it were.

We know know that the dose I took was about twice what's optimal. It's a sublingual lactose-based pill, or was, and the effect was rapid. The pattern on the carpet in front of me softened, life softened, and I felt something very similar to the effect of valium or some other GABA agonist. Well that's quite impressive I thought, but it left me fully functional and I was on my way to a Neil Young concert.
While on the way I smoked a couple of strong joints.
Then there I was, trapped indoors with thousands of strangers in a swirling mob.
This sort of thing is of course a recipe for social anxiety, and it's normal to negotiate this effect, which can get quite harsh, if you're a stoner who wants to be really stoned for, you know, NEIL.

But this time things were completely different - I was immune to anxiety. And I remained immune to anxiety from this cause for a long time after I stopped taking ReseT, which I didn't take regularly for long, and it's never really been all that strong ever again.

Now, the experiential effects I've described haven't been described by anyone else - that is, no-one else who's benefitted from ReseT since seems to have observed the point at which it happened in the way I did. That's Okay, I'm used to being highly observant of such things, even though it gets me laughed at sometimes. I only noticed the strong GABA effects on the first two or three occasions I took ReseT, fading as I became less prone to anxiety.

Anyway I drifted away from the probiotic problem as other work came along, and though Elizabeth McKenna kept in touch I did think the proposed mechanism, that the effect can be explained by the manipulation of oxidative stress, was putting too much onus on the immune system. and too much responsibility on bacteria.

But obviously I didn't have all the facts that the people on the ground did, and as it happens there's nothing better than a highly simplistic hypothesis - IF the evidence supports it.
If the evidence supports a simple explanation, there is no immediate requirement for terms like complex and multifactorial. To paraphrase William of Occam.

The study design was a single-arm treatment study, wherein the effects of treatment were assessed and compared to the baseline pretreatment values (Day 1). Once the baseline samples were collected, the study participants were requested to take two 12 mg tablets, sublingually, twice daily (48 mg daily dose) for the duration of the study, and maintain their normal daily routine. Treatment sample collection and the measurements were performed on Days 15 and 70. The graphs demonstrate after 14 days of treatment, most of the participants experienced improved psychological health that were consistent with reduced urinary levels of F2-IsoP (Figure 1A). In case of depression profiles, there was significant improvement observed by Day 15 (Figure 1D). However, with further treatment, the participants continued to exhibit improvement, with significant improvement in the metrics of life satisfaction (Figure 1B) and daytime sleepiness (Figure 1C) by Day 70. The correlation coefficients between the F2-IsoP and mental health parameter values were −0.99, 0.99, 0.95, and 0.96 for life satisfaction, sleepiness, depression, and anxiety, respectively.

To be sure, the study wasn't controlled. But a placebo effect shouldn't lower F2-IsoP that much, and I think it very unlikely that placebo effects can be maintained this consistently for 55 days, especially given the very minimal interaction between participants and clinicians during the study. But note that the antianxiety effect I noticed is probably only being experienced by one or two participants.

Anyway, placebos shouldn't affect drosophila, and there's also a fruit fly study that corroborates that ReseT is bioactive (via NF-κβ).

Treatment with Bacterial Biologics Promotes Healthy Aging and Traumatic Brain Injury Responses in Adult Drosophila, Modeling the Gut–Brain Axis and Inflammation Responses
https://www.mdpi.com/2073-4409/10/4/900
Here we get to compare ReseT with a well-tested live bacteria that is closely related to its source, LGG.

Well. Interestingly there may be a "too much" point here with both interventions where they are no longer great, with a lower tolerance for the live probiotic. These are not placebos. 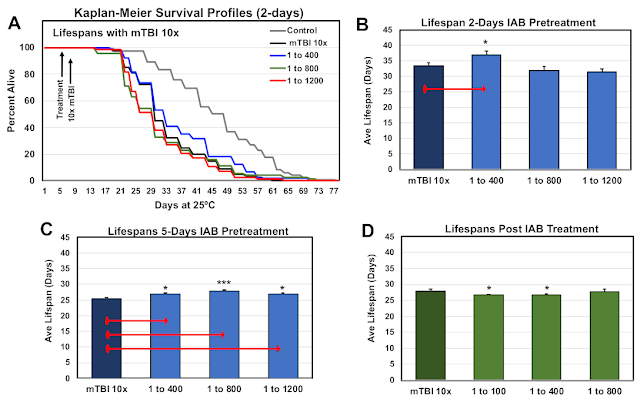 Anyway L. Bulgaricus was the probiotic that Élie Metchnikoff predicted would extend life in 1907.


Disclaimer - my work for Labyrinth in its early days was pro bono, and I've never been paid by anyone involved. I did receive two textbooks.
Posted by Puddleg at 19:57 No comments: