Some Answers to that Question

Let's back the truck right up to 1923. Insulin was introduced the year before and is now being mass produced by Eli Lilly & Co. Diet research into diabetes has crystallized into a proven diabetic diet (the diet that will best extend life in the absence of insulin). This is defined by Ladd and Palmer in the American Journal of Medical Science of August 1923 with this formula. 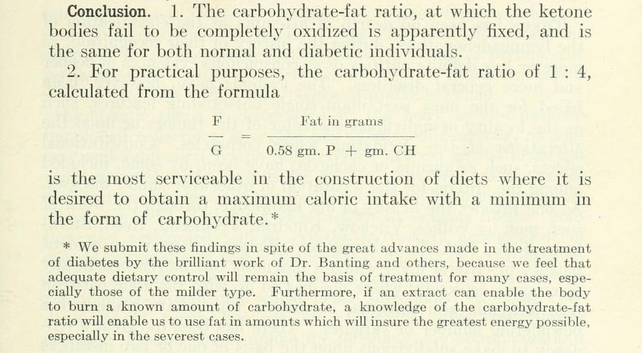 Thus we have the classic 1:4 ratio of carbohydrate to fat that defines the limits of ketosis, with the refinement that protein straddles the separation, with 58% of protein counting as carbohydrate (gluconeogenic) and the remainder as fat (ketogenic).
Note the epilogue; "we feel that adequate dietary control will remain the basis of treatment for many cases, especially those of the milder type".
As in this example from David Unwin's 2014 case series. This is the sort of paper I like best today; what it lacks in randomised, controlled rigour (ffs people, the point has already been proven) it makes up for in realism - these types of papers show what it takes to treat real people in clinical practice, it's hard work sometimes but the results are clearly worthwhile. 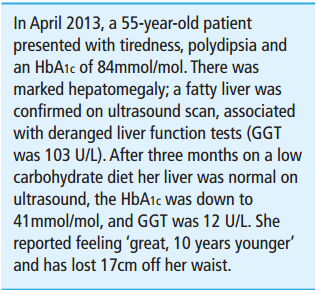 And here's a picture of Dr Unwin, getting the point across.

How does this fit with the glucagonocentric restructuring of diabetes by Roger Unger (the "father of glucagon" and 1975 Banting Medal recipient)?

When someone with deficient insulin response (like the woman in Dr Unwin's example - polydipsia is a sign of beta-cell failure) eats carbohydrate, these things happen:

1) Glucose enters the blood and glucagon is elevated as a result. 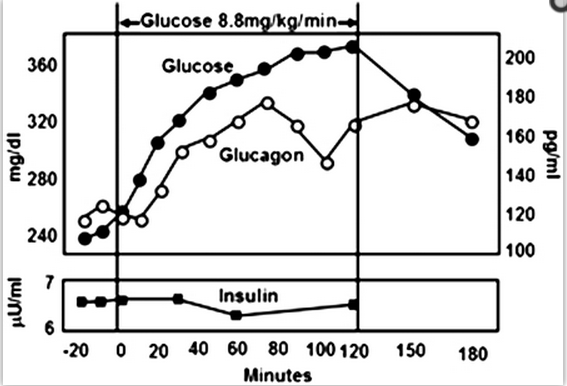 High glucagon concentrations stimulate the liver to break down glycogen, releasing glucose, and to make more glucose from protein (58%) and triglycerides (10%), as well as ketone bodies.

2) If the blood sugar concentration rises far enough - more likely after a carbohydrate meal - glucose enters the liver cells at an excessive rate. This glucotoxicity increases gluconeogenesis further. In fact I suspect this is the tipping point, and that this high blood glucose and its effect on the liver (and kidneys) is what separates the ketoacidosis of starvation from the lethal ketoacidosis of diabetes.

3) because extra carbohydrate has been consumed in the meal, the clearance by cellular oxidation of hepatic glucose and ketone body output is proportionately delayed, maintaining a higher level of glycaemia than would otherwise be the case.

In 1923 ketogenic diets (then known for the treatment of epilepsy and tested alongside diabetic diets) were not considered suitable for diabetics.
[Edit: this is incorrect as the diabetic diet of Newburgh and Marsh, 1923 is a true ketogenic diet at 35g carbohydrate per day, 0.67g protein per Kg per day, and the remainder of 30-40 calories per Kg per day from fat. Protein is restricted to 35g day in the induction period with 85-95 g fat per day. Newburgh and Marsh report the complete absence of acidosis in 180 patients, including juvenile cases, maintained on their diet, which would be considered a ketogenic diet in non-diabetics. "Not only does acidosis not develop in patients who are living on this diet, but it is a fact that all our patients showing at admission an acidosis short of coma rather promptly lost their acidosis while taking the high fat diet."]
At some point in the 70's or 80's they became acceptable (that the brain can run on ketones was discovered in 1967). The added benefit of a ketogenic diet is a further restriction of the glucagon curve, less competition from dietary glucose, less glucotoxicity, and, in animal experiments, a diminishing of pancreatic alpha cell to beta cell ratio.
In normal starvation metabolism a high level of ketone bodies stimulates the release of insulin from beta cells, just as a high level of glucose does, so that the action of glucagon is kept optimal, resources are not wasted, and toxicity is minimised.

A quick search shows that insulin is not universally available today, and not always affordable by everyone. In communities where this is the case the research of 1923 is still relevant for type 1 diabetics, in terms of survival until medicine is available and affordability (making a limited supply of insulin last longer). Safety is also an issue - the lower the dose of insulin required, the lower the risk of hypoglycaemia. It is certainly still relevant for type 2 diabetics. Low carbohydrate, high fat diets will probably become the norm again sooner than we think.
Even the Daily Mail has dispensed with the usual "experts warning about all that fat" add on when discussing LCHF therapeutic diets.

So, a low carb diet still deals with the metabolic problem best? I cannot fight that logic.
I understand that the discovery of how to obtain and then later create insulin is helpful, but it doesn't address the original problem of why the person developed this aberrant physiological condition and how to best stop the damage.
When doctors return to that we will have our day.

As a long time reader of your writings George, thank you for introducing me to Dr Unger's work. Every now and then I find myself making an 'aha' exclamation when finding "connections" (in my mind at least) in disparate works. For example Dr Robert Lustig has used "Octreotide" to reverse obesity. Roger Unger uses "Somatostatin" for his Glucagon experiments, what do these two chemicals have in common is answered here!.
Keep up the good work George!
Regards, Kiwi Geoff (Christchurch , NZ)

What an interesting protein!
http://en.wikipedia.org/wiki/Octreotide

The cyclical peptide structure is similar to that of the bicyclical Death's Cap mushroom toxins.

I once had a patient who tried to commit suicide by injecting a whole bottle of insulin. He figured he'd be dead by the time his wife came home from work 8 hours later. 8 hours later when the wife came home she found him looking as if he was about to pass out, called an ambulance and saved him.

Obviously, that's not the way our body works. The pancreas doesn't give you a bunch of insulin and tells you to use it any way you want. So why do we keep doing that to diabetics expecting it to work?

I think the 58% part of the protein keto ratio thing needs updating, and to reflect specific ketogenic vs glucogenic aminos.

@Ash, 1920s protein was pretty homogeneous, meat or soy. Might be tweakable today.
@Silvia,
Have you seen the movie Reversal of Fortune? It's about Claus von Bulow, who was tried for the murder of his wife with an insulin overdose. In the reenactment, it took ages, she died of hypothermia I think.
Insulin probably wouldn't be sufficient to depress glucagon secretion, and would exert its hypoglycemic effect mainly on liver and peripheral tissues.
I've experienced hypoglycemia back when I was at least prediabetic and trying to use insulin sensitizing supplements rather than carb restriction to feel better.
A couple of times I'd be doing something, with normal strength, nd feel my consciousness shrink. It would get smaller and smaller and I realised that I would collapse if it vanished. Luckily it came back after a while.

Interesting paper tweeted by PD Mangan is definitely relevant to this discussion tho inspired by outre life extension pathway and drug.

Hi David Unwin here, GP Southport UK as in the photo above!
I am about to publish something on improvements in liver function on a low-carb high-fat diet -wanted to send you a summary but cannot find your e mail

Hi David! email me at puddleg@gmail.com
Sorry about using the pic without you permission (lifted off twitter!). I've felt a bit guilty about that ever since...