Japanese epidemiology puts another hole in the lipid hypothesis

Everyone is reading this masterful analysis (PDF) of the lipid hypothesis from Japan, a country where it doesn't even seem true, which hasn't stopped the Japanese authorities from recommending cholesterol limits. The whole thing is worth reading, and sections of it are particularly congruent with the reverse lipid hypothesis of hepatology - that saturated fat protects the liver.

That this reversal comes from Japan is particularly interesting, because Japan is the poster boy of the lipid hypothesis - low intake of saturated fat (2.2%E in the Seven Countries Study), low CHD mortality, and has long been used to support the pious hope that if our SFA intakes were only low enough we'd see a comparable reduction in CHD. The reason there's no correlation between SFA and CHD in meta-analysis is, so they say, because we all eat too much SFA, except for the Japanese (oh, and the people of the former USSR and its satellites, who have fantastically high CHD mortality, but let's ignore that). The limbo argument - you can't get under the CHD bar if you're not low enough - is one of those last-ditch defenses of lipid hypothesis epidemiology.
Another is the undisputable truth that in many countries, the ones we know best, CHD mortality did fall at around the same time that SFA intakes declined. Steven Hamley makes the valid point that this SFA was in practice mostly replaced with refined carbohydrate, which no epidemiologist would predict to have lowered CHD based on any data we have. I'll link to this post of Steven's here and recommend regular reading of his blog for anyone interested in this topic.

Here's the mortality trend graph for the USA, typical of NZ, Australia, Canada, Finland and other big dairy and meat countries. SFA goes down a little, CHO goes up, CHD goes down a lot and keeps falling after 1972. Okay. 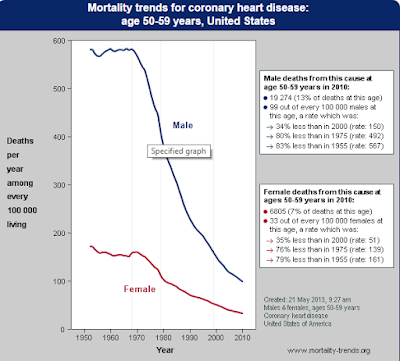 Here's the same data for Japan. 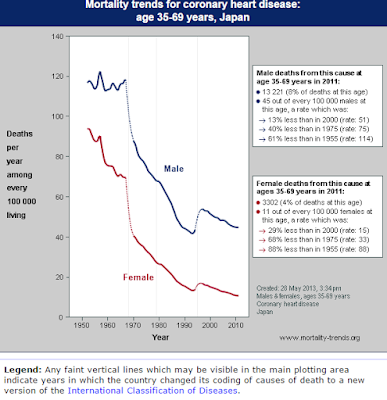 Ignore the glitch in the coding; it's obvious that CHD mortality fell from about 1970 or 1971. What happened to Japanese fat intake? Saturated fat intake doubled between 1965 and 1975, kept climbing thereafter. Serum cholesterol levels have been going up too.
What we see here is exactly the same CHD mortality pattern in two countries with directly opposing saturated fat and serum cholesterol trends. Two countries which were placed by Keys et al. at opposite extremes, kept apart by their difference in SFA intakes and serum cholesterol.

There are two or three possible explanations. One is that there is an optimal SFA intake, higher than 1965 Japan, lower than 1965 USA, pretty much where both countries are today. This has a certain biological plausibility (though it does require belief in Paleo just-so-stories), but it doesn't match other epidemiology (replacing dietary SFA with CHO elevates serum SFA, reduces LDL particle size, increases CHD events, and doesn't alter CHD mortality. Which higher or lower SFA doesn't correlate with anyway within any population band, be it Japan or Finland).

The second explanation is an improvement in treatment. This is usually countered with the objection that statins weren't available till the 1980's. So - warfarin, nitrates, beta-blockers - were those all being prescribed for no reason? Sure they didn't lower cholesterol, but if that isn't the dominant factor in CHD it's plausible that they had a significant effect as doctors got better at using them.

The third explanation is that this was an epidemic with an unknown or unappreciated cause, and it passed like historical epidemics do. For example, a pathogen wiped out by vaccination or other changes. Smoking, which does fit the trends and which does get some credit. Smog and industrial and agricultural pollution; the mortality trends closely match the beginnings of environmental and workplace regulation of pollutant exposure in both the USA and Japan. Silent Spring was published in 1962 and the period 67-72 represents a tipping point during which restrictions on household smoke, industrial emissions, agricultural residues, workplace exposures, and vehicular emissions began, and after which they became increasingly strict. Another consideration is that 1972 or thereabouts marked the end of national conscription in many western countries. After that date there was a growing expectation that people wouldn't and couldn't be expected to do things any longer if they didn't want to. Turn on, tune in, drop out. The decline of the stress-driven West began, though how this played out in Japan I have no idea. Micronutrition also improved, with the availability of out-of-season foods, new cultivars and imports. Increased PUFA intakes should be seen as part of this trend - the PUFA aspect of the lipid hypothesis was really a proposal for nutrient megadosing to achieve a pharmacological effect not seen, according to Keys et al., with normal intakes of PUFA.

What are we left with today as primary causes of CHD? A significant residue of chemical atherogenesis from pollution and smoking; the effects of malnutrition and the oxidative stress of deficiency, made worse by high-energy diets and the adulterants and contaminants of food processing technology; and above all the effects of metabolic diseases - MetSyn, hyperinsulinaemia, type 2 diabetes, and so on.
The disease patterns of the present are not just those of the past repeated with more or less intensity.

Email ThisBlogThis!Share to TwitterShare to FacebookShare to Pinterest
Labels: Japanese epidemiology puts another hole in the lipid hypothesis

Jack Kruse linked me to this soon-to-be-published report about CVD -- http://www.tbiomed.com/content/12/1/9/abstract . Specifically, the role of Sulfur in it. It is an epic read, and talks specifically about the role of sulfated Cholesterol in maintaining RBC flow through capillaries (what they called the Electrokinetic Vascular Streaming Potential).

Also goes into why free radicals are necessarily for breaking down Hyaluronan to re-distribute sulfate to the tissues in the heart.

While it doesn't really explain the exact data posted above, it at least does provide a very plausible mechanistic basis for why CVD even occurs in the first place.

That fits with this correlation

PLP is the main cofactor for separating sulfates from amino acids.

Good one, George. I was looking up the French stats the other day and noticed the Soviet and Eastern European numbers (as you mentioned). Scary stuff.

Any thoughts on the French?

My boss just came back from Paris, and I asked him about what he saw in terms of people eating. He hedged a bit, as he believes he didn't necessarily eat at restaurants the locals frequent, but he did say it was easy to tell the American tourists from the French -- the French were almost uniformly thin. They seemed to eat a lot of bread, cheese, and ham, often while walking. He also saw a lot of locals running in the area he stayed.