Oliver and Boyd 1953 - lessons from the early history of the lipid hypothesis.

In 1949 Ryle and Russell in Oxford documented a dramatic increase in coronary heart disease (CHD), and the Registrar General’s Statistical Tables of 1920 to 1955 showed that there had been a 70-fold increase in coronary deaths during this 35-year period (Oliver 2000; Ryle 1949). This sudden surge in coronary heart disease sparked research into its causes. A case-control study published in 1953 of 200 post-myocardial infarction patients and age-matched controls established that those with disease had higher low density lipoprotein (LDL) cholesterol levels (Oliver 1953).

The 70 fold rise seen by Ryle and Russell seems to have been mainly due to vagaries in coding cause of deaths during the period, plus a decrease in mortality; in large part, more people were dying of CHD because more people were living to a suitable age, and CHD was becoming a popular diagnosis, replacing other similar causes on death certificates. CHD almost certainly did rise, but probably not nearly so fast. And of course it's ridiculous to think that people didn't eat much saturated fat before the 1920s. There's a small mistake in Hooper et al.'s citation of Oliver and Boyd 1953; this paper doesn't mention LDL cholesterol, just serum cholesterol. The reviewers would have picked this up if they'd been interested in the early history of the lipid hypothesis.The Plasma Lipids in Coronary Artery Disease. Oliver MF, Boyd GS. Br Heart J. 1953 Oct;15(4):387-92. Free text.
Oliver and Boyd 1953 does show a significant difference in cholesterol levels between MI patients and case-controls. That's true (except that strangely there was absolutely no correlation in women in the 50-59 age group). Peak decade for MI in men (largest % of cases) was 50-59, for women 60-69. 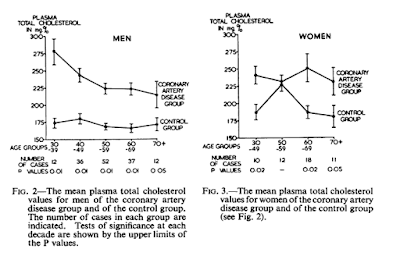 Does this study indicate in any way that saturated fat in the diet was linked to the high cholesterol associated with CHD?
In a small pilot study an irregular diurnal variation in plasma cholesterol was observed thus it was decided that all samples should be withdrawn between 8 and 8.30 a.m. in the fasting state. No blood sample taken during anticoagulant therapy has been included in this series. Similarly, no blood sample taken within five weeks of the occurrence of myocardial infarction has been included. All subjects were receiving a light ward or weight-reducing diet.

So - the MI cases had been receiving the "light ward or weight-reducing diet" for at least 5 weeks. The controls were "convalescent", and as convalescence was still a leisurely process in hospitals in the UK in 1953, we can safely assume their exposure to hospital food was similar. Indeed, the study indicates that there was no age-related obesity in controls:

Hypertension and obesity are more common after the menopause, but neither would seem to influence these observations; all the control subjects had a diastolic pressure of less than 90, and a morphological study employing a ponderal index assessment (Sheldon et al., 1940), did not show any tendency to endomorphy in this decade in the controls.

Though the text is not clear on this, the MI cases were probably more likely to be on the weight reducing diets than controls.

So what does Oliver and Boyd 1953 tell us about saturated fat and heart disease? Surely it demonstrates either 1) that the serum cholesterol level in MI cases has nothing to do with diet, or 2) that the serum cholesterol level in MI cases relates to a response to diet which is unique to MI cases, and which does not go away on light hospital or weight-reducing rations. There are three possible explanations of this; 1) that genetic determinants of serum cholesterol, such as FH phenotype, are related to MI (which seems pretty uncontroversial), 2) that cholesterol is elevated in response to an MI, and that this effect plays out over many weeks, 3) that cholesterol response to diet is influenced by either a recent MI or by genetic conditions predisposing to MI.
That saturated fat can cause heart disease in healthy people doesn't seem a logical conclusion to draw from Oliver and Boyd and is not a possibility mentioned in the text.

Any other explanations? 1953 was one year after the killer smog of London. The Oliver and Boyd study took place in Edinburgh, historically known as Auld Reekie for its air pollution. The Clean Air Act 1956 was the first attempt to limit air pollution in the UK. These and similar later Acts, the publication of and response to Silent Spring (1962), and the decline in cigarette smoking following (in the U.S.) the Surgeon General's report and Consumer Union reports into smoking (1963) seem to match the rapid decline in CHD after 1970 in the English speaking world and those countries that undertook similar public health measures in the same historical period (including Scandinavia and Japan).
Oliver and Boyd didn't ask questions about smoking, which might have been revealing, but they did at least set up their experiment to control for diet. It's just a pity that Keys and Hegsted ignored that.

Email ThisBlogThis!Share to TwitterShare to FacebookShare to Pinterest
Labels: Early lipid hypothesis - the cholesterol level is independent of diet in heart attack cases

The big problem with this Cochrane review or any other on this topic is the quality of the data. As explained here
E Archer et al (2015) Mayo Clinic Proceedings 90 (7) pp 911-926
which begins by noting:
“the appalling track record of highly publicized nutrition claims derived from epidemiologic studies ….. that consistently failed to be supported when tested using objective study designs.”
In one evaluation of over 50 nutritional studies for a variety of dietary patterns and nutrient supplementation it was found that:
“100% of the observational claims failed to replicate”
and that 5 claims were statistically significant
“in the opposite direction”.
More specifically:
1.Genuine doubts about the reliability of assessing food intake
2.What exactly is meant by saturated fat in the different trials?
3.With polyunsaturates, essential to know ratio of omega-6:omega-3.
We have no reason to condemn the sat fats and strong indications that some of them are key nutrients in their own right.

The immediate thing that leapt to MY mind when i read "1920 to 1955 showed that there had been a 70-fold increase in coronary deaths..." was that this is when Crisco and margarine took over the dietary-fat department. Ever since the FIRST TIME i read that trans-fats and natural sat-fats were lumped together, i start to seethe at the mention of general sat-fat badness ... and i tend to feel the same nowadays when people refer to generic "polyunsaturates." Not only is there "no such thing as a macronutrient," there are no macro-sub-nutrient GROUPS.

And there are no individual fatty-acids IN ISOLATION in nature, either. Nor AAs. (caseine as the only protein in a rat-diet -- AAARRRGH!)


it looks like MF Oliver ended up as something of a cholesterol sceptic.

While it is
undeniable that those with serum cholesterol levels or
blood pressure in the top 10% or 20% of the population
distribution are at higher risk than those with lower
levels, the actual risk is not all that high.

TOTAL CURE FOR HEPATITIS WITH CANNABIS OIL
I’m a living proof that Hep C can be cured with Cannabis oil.In 1998 while donating blood I found out I had Hep C.I was told there was no cure back then. I was told to quit drinking alcohol ASAP or would kill me within 10 yrs so I quit drinking,and in 2014 i started to using cannabis oils sent to me by a specialist,I applied it everyday & was told after few months that I was Hep-C free,I asked my specialist if the oil was so fast in treatment & he replied,” If you took care of your liver by not drinking & have not being smoking pot instead then he said it’s quit possible that cannabis oil cure fast” because I never went for any treatment,I was told it cost $20,000+ for the treatments, believe me this gilead company are sick MF'ers, the drug by this same company in vietnam is $900, the cost for this drug in the USA is $84,000. It is a supreme example of the fleecing of America by these scumbag lower than life corrupts pieces of shit. hail to one that,you can contact the specialist that helped me get cure by sending him an email drlovepriest@gmail.com am sure he will receive you request to help,several people have been cured for quite awhile now wish i helped introduced in my hepatitis organization online. while this is great for us there is nothing really new here to read about,so people,don’t discriminate,educate so more people have a chance of curing this deadly disease that killed my dad.R.I.P Dad! just help me pass this information on to anyone out there who is struggling to have a cure,lets save the poor once who have disease and cant afford to pay for the madications

People do clear HCV spontaneously, at a rate of about 1% per year. It's happened to a couple of people I know. Especially if you never had a PCR but only an HCV antibody test back when you were diagnosed with HCV (PCR tests weren't always available for routine HCV testing) because the rate of clearance in the first 6 months is 50% or better. So you could have cleared the virus at any time, but like a lot of people were left to believe you were still infected, because you couldn't afford the more expensive PCR diagnostic test which is the only reliable one.
There's a bit about the different types of testing here.
http://www.ncbi.nlm.nih.gov/books/NBK43243/

Here my thinking on this now

- we are seeing, apart from maybe some FH, survivor bias from a time when MI acute medical survival was poor.
The lipid paradox - people with higher LDL, TGs, or sdLDL are more likely to survive MIs.

If this is true in a modern hospital ICU, mightn't it have been much more true in 1953?