On Christmas Eve the media carried reports that scientists had identified a hormone, produced by the liver, that switches off sugar cravings, and which might be the answer to sugar addiction.

"Research on mice and monkeys has shown that the hormone, FGF21, signals the brain to avoid seeking sweet foods. 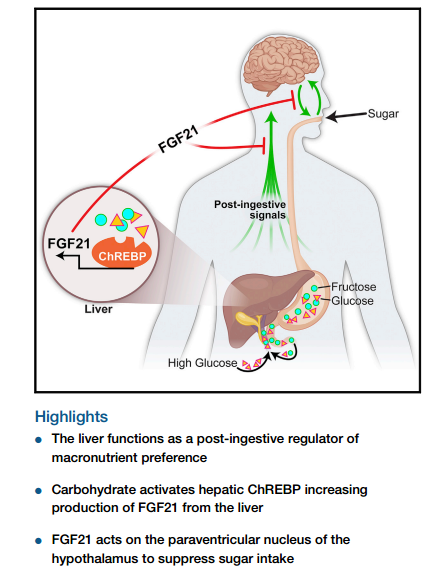 Harnessing the effect, possibly by copying the hormone's action with a drug, could help patients who are obese or suffering from Type 2 diabetes, scientists believe."

We all know that a LCHF diet suppresses the appetite for sugar - one of my dietary epiphanies involved standing in a supermarket, among shelves of garishly packaged chocolates and sweets, and realising that though being exposed to that stuff had always obliged me to buy some piece of it to take away and eat before, now I hadn't a single impulse worth fighting to buy or eat any of it ever again.

So it was an obvious question (one I may not have asked had I read the full paper first, because in the actual experiment FGF21 is clearly being produced in response to eating carbohydrates) whether a ketogenic diet raises FGF21.
It does - FGF21 is part of the regulatory response to fasting or a ketogenic diet (in mice).
So, eat keto, and your liver produces FGF21, which stops you wanting sweet food. Simple.

But, like that book by Ben Goldacre, I think you'll find it's a bit more complicated than that.

Luckily though, the complexity of FGF21 seems to fit a pattern we've seen before with other hormones.

While I was looking for the link to ketosis, I noticed in my search results a paper linking elevated FGF21 to cardiovascular disease. How can something that stops you from eating sugar be linked to CVD? That was before I knew that FGF21 was produced in response to eating carbohydrates. By the time I read the CVD paper, I knew what I was looking for. Here it is;
The metabolic syndrome has also been associated with
increased serum FGF21 levels, whereas an increase in FGF21
serum levels has been suggested as a new biomarker for
nonalcoholic fatty liver disease or steatohepatitis (17, 54, 60,
62, 116, 118). A study on obese children confirmed that
increased serum FGF21 is correlated to BMI and free fatty
acids (90). When serum FGF21 levels were tested after an oral
load of fructose, it was interestingly shown that FGF21 values
acutely spike, presenting a similar curve as serum glucose and
insulin after a glucose load. This finding shows that FGF21
presents a typical hormonal response possibly mediated by
carbohydrate-responsive element-binding protein that is activated
by fructose (18).
...it was shown that FGF21
levels are predictive of combined cardiovascular morbidity and
mortality (Fig. 3) (59). Increased baseline serum levels of this
molecule were found to be associated with a higher risk for
cardiovascular events in patients with type 2 diabetes in the
Fenofibrate Intervention and Event Lowering in Diabetes
(FIELD) study, and interestingly this association tended to be
stronger in the patient group that presented higher total cholesterol
levels (84). The authors speculate that the increased
basal levels of FGF21 in this group of patients may be an
indication of the potential role of FGF21 as a biomarker for the
early detection of cardiometabolic risk and furthermore that it
may reflect a compensatory response or the need of supraphysiological doses of FGF21 as a result of FGF21 resistance, a hypothesis proven in obese mouse models (21).

FGF21 resistance and hyperFGF21aemia. It's a familiar pattern. If FGF21 is produced in response to carbohydrate - maybe when hepatocytes reach glycogen saturation or ATP depletion or some other threshold - but your lifestyle or culture involves eating past the signal, maybe because of some dopamine effect of sugar you're sensitive to, or because you bought the 1.5 litre bottle of Coke because it was cheaper than the 300ml and it shouldn't go to waste, or because your mum or dietitian is telling you to finish your cake or keep eating the low fat food regularly, then maybe your liver eventually, because you stopped listening to it, makes so much FGF21 that the cells that should notice it become insensitive to it, so you eat more sweet carbs, make more FGF21, and get the same vicious cycle that we see with insulin.
(Or maybe there's some other cause for FGF21 resistance, a virus or environmental toxin or food colouring or genetic bad luck. It doesn't really matter unless you finish the cake.)

So what happens when a modern human goes on a keto diet or fasts? FGF21 may not rise at all - instead, sensitivity can be restored by its dropping, much like insulin.


Raymund Edwards astutely tweeted this study, which shows what happens to FGF21 when humans fast for 10 days. It's not the same as it was with the mice. In the mice on the ketogenic diet, it sometimes looked as if FGF21 played a role in ketogenesis - in the fasting humans, ketones rose first and FGF21 followed days later. This actually makes more sense, because ketones suppress appetite independently of FGF21, and are produced through basic biochemical economics - this shouldn't require some fancy new hormone, just let glucagon dominate over insulin and the Krebs cycle will do the rest.
In some of the humans, FGF21 was elevated at baseline and dropped fairly quickly, as can be seen in the spaghetti plot: 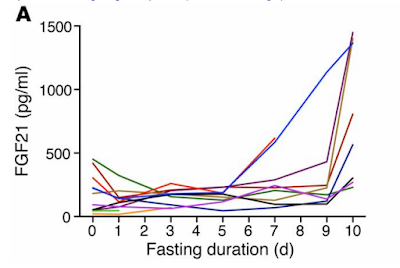 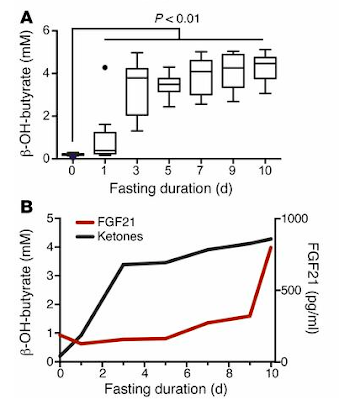 Anyway, this line of investigation, which I have only skimmed superficially here, gives us two possibilities; we have pathways which we can use to explain the loss of a sweet tooth when carbs are restricted (either FGF21 elevation, or the restoration of FGF21 sensitivity), and, we have an additional connection between sugar and cardiovascular disease.

What does it mean that FGF21 rises so much when fasting (and probably similarly on a keto diet), if elevated FGF21 is associated with CVD and other metabolic diseases?

If you read the CVD paper, FGF21  has a number of beneficial and antiatherogenic properties. It doesn't seem like bad stuff to have elevated, unless it got that way from a high intake of fructose.

Email ThisBlogThis!Share to TwitterShare to FacebookShare to Pinterest
Labels: FGF21

"Oleate and linoleate increased FGF-21 expression and secretion in a PPARα-dependent fashion, as demonstrated by small-interfering RNA–induced PPARα knockdown, while palmitate had no effect. In vivo, lipid infusion induced an increase of circulating FGF-21 in humans, and a strong correlation between the change in FGF-21 levels and the change in FFAs was observed. "

So combine linoleic acid consumption, sugar consumption, and FGF21 resistance, and it sounds like you've got a recipe for high serum levels of FGF21 and a fatty liver leading to fibrosis (aka cirrhosis).

The mice were given fatty liver through the standard approach: Research Diet's D12492, which has a high sugar and linoleate content. Other research has shown that if you delete the linoleate and replace with saturated fat, the diet does not induce obesity.

Compare the composition of D12492 and the diets used in the above study...

So I don't think sugar is the root problem here.

This is interesting too:

Fibroblast growth factor 21 (FGF21), a hormone that mediates an adaptive response to starvation, is also a long-standing marker of mitochondrial disease. In this article, we describe the metabolic benefits induced by mild mitochondrial stress via FGF21 induction in polymerase gamma mtDNA mutator (POLG) mice, a model of mitochondrial disease and premature aging. When challenged with a high-fat diet (HFD), these mice resist diet-induced obesity and its underlying associated disease states. In addition, nutrients from a HFD appear to reverse metabolic imbalance in these mice. HFD also robustly increases fat metabolism and improves mitochondrial function in brown fat, which mediates adaptive thermogenesis. Hence, we highlight a metabolically favorable synergy between mitochondrial stress and HFD facilitated by FGF21 in this mouse.

Fibroblast growth factor 21 (FGF21) is active in murine adipocytes and has beneficial metabolic effects in animal models of type 2 diabetes mellitus. We assessed whether FGF21 influences lipolysis in human adipocytes and 3T3-L1 cells. FGF21 had no short-time effect (h) while a 3-day incubation with FGF21 attenuated hormone-stimulated lipolysis. FGF21 did not influence the mRNA expression of genes involved in regulating lipolysis, but significantly reduced the expression of the lipid droplet-associated phosphoprotein perilipin without affecting differentiation. Via reduced release of fatty acids into the circulation, the anti-lipolytic effect could be a mechanism through which FGF21 promotes insulin sensitivity in man.

That's a really good news for all diabetes patients as well I think. I've read about some research about Hepatitis C patients experiencing weight gain primarily because of HCV altering some liver hormone activity. It could be connected with sugar-craving hormone. It was quite interesting to see the new Hep C medication Harvoni and weight gain correlation. It is of course not clear if the weight changes are due to the hormone production alteration but that is a correlation that would be interesting to study.

Fibroblast growth factor 21 (FGF21), a metabolic hormone predominantly produced by the liver, is also expressed in adipocytes and the pancreas. It regulates glucose and lipid metabolism through pleiotropic actions in these tissues and the brain. In transgenetic mice, fasting leads to increased PPAR-α mediated expression of FGF21 in the liver where it stimulates gluconeogenesis, fatty acid oxidation, and ketogenesis, as an adaptive response to fasting and starvation. In the fed state, FGF21 acts as an autocrine factor in adipocytes, regulating the activity of PPAR-γ through a feed-forward loop mechanism.

Very interesting. I found this paper on ketogenic diet and FGF21 in wild-type and ob/ob mice.
I'm surprised that there was no change in PPAR-alpha in the wild-type mice. However, the ketogenic diet had a big effect on FGF21.

This physiology of "sweet tooth" is really interesting. Others have noted that after abandoning most dietary sugar, vegetables increasingly have a modest sweet flavor. Even "sweet cream", which is most modest in carbohydrate (at least according to the label), is just sweet enough to be enjoyable.

In recent years, I've liked to say that when I want chocolate, I eat the 90% cocoa stuff. When I want something sweet, I eat the 85% cocoa. Sometimes I feel like I've had a square or two too much of the 85% variety, and the feeling is reminiscent of an earlier time when too much sweet meant too much cake and icing. For most people, the 85% chocolate is just too bitter.

Interesting there is a biochemical signal that might be saying, "Hey, you've had too much sweet. Knock it off for now!"

Very interesting stuff... I think the key thing here again is moderation... I lost all of my weight by not eating carbs in every meal but I still have carbs, especially prior to exercise for glucose use and replenishment. What is being discussed here is instinct, the sweet tooth... all of this is based on nature and the food provisioned by nature at whatever time of year we are in... most of the year is low sugar and becomes more acute the further you go from the equator, nature didn't torture us to want sugar when there was none available, which is why high fat / low carb diets invoke this hormone... in autumn, glucose/fructose based foods cause a frenzy of gorging so that we are suitably equipped to handle the cold and food shortages of winter... check out <a href="http://www.donteatforwinter.com>Don't Eat for Winter</a> for more about this hypothesis...

Increased lean muscle mass accumulation: the benefits of HGH are similar to those of testosterone. In men, it allows for easier bulking up and getting the most out of every single workout session. Human growth hormone is also required to maintain optimal weight and burn more fat. full prosolution review here

I would recommend my profile is important to me, I invite you to discuss this topic...