The Tragedy of William Stark, who conclusively proved that eating crap will kill you, by a process of self-experimentation, in 1770, a fact which more people should pay attention to.

How did I not know about William Stark MD?


Born in Birmingham of an Irish mother and a Scottish father, he studied philosophy in Glasgow and medicine in Edinburgh and at the University of Leiden before going to work as a doctor in London in 1765.

"The person on whom these experiments are tried is a healthy man, about twenty-nine years of age, six feet high, stoutly made, but not corpulent, of a florid complexion, with red hair."
However, the Doctor who attended his final hours writes "He was of a fair complexion, tall, of a thin make, and healthful."

In 1769 Stark began a series of dietary experiments with observations on the effects of bread and water over a two week period. He included data about the weather, weight loss or gain, stool number and characteristics, and sexual frequency (was there an unfortunate Mrs Stark?). 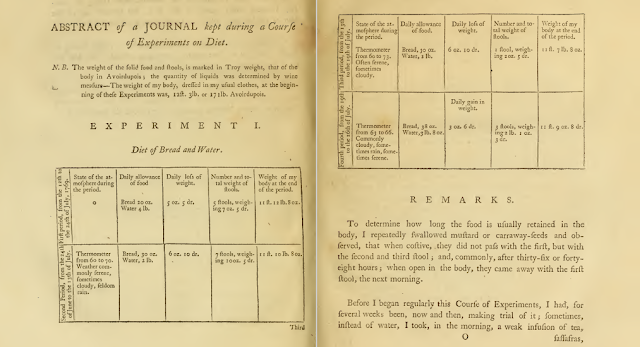 He followed this up - without a break or ""washout" period of normal diet - with bread, water and 4oz and 8 oz of sugar daily. 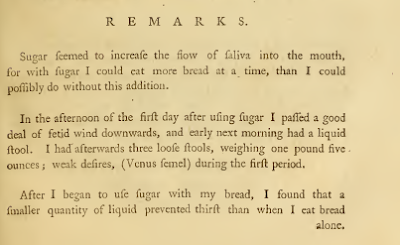 During the third period of this experiment he one day ate some meat, and drank some wine. At the end of this second fortnight Stark felt "perfectly hearty, my head clear, often hungry, but never had any desires."

Stark's subsequent experiments are too many to list, but included flour and suet, flour and olive oil (he gained the same amount of weight on each). By now he has scurvy - his gums are black and he has lost a tooth, which began to hurt on the sugar diet. Then he began to live freely on animal food, milk and wine, and recovered his health and spirits - but not for long. Thinking that his afflictions were in fact due to sugar, Stark resolved to test this hypothesis with a return to the bread, sugar, and water diet, eating 6 oz sugar per day over 5 days without his gums being affected, but with the usual loss of desire. For a week in November 1769 he ate bread, beef and water, and "on the third day of this period I began to have desires, which were considerable in the night. On the fifth day, Venus semel". (Semel means once in latin; the expression Venus bis, or twice, appears more often in the text).

Stark then tries living only on lean, well-boiled beef, with its gravy (cooking water and juices).
"In two or three hours after a meal of ten or twelve ounces of meat with its gravy, I became hungry, and was particularly so every night at bed-time. I never had any wind in my stomach, and very seldom passed any downwards. My spirits, at all times very good, were somewhat raised after each meal; but my sleep was every night disturbed by dreams, a circumstance which was new to me. I commonly awoke very early in the morning, and found myself lively and well refreshed : and although I had not slept my usual time, I was never drowsy of an evening. I had sometimes weak desires at the beginning of this period, but none afterwards. My stools resembled in colour, the rust of iron."
For the next 5 days he added fat to the beef, and slept more soundly. He then spent 2 weeks on flour and suet, in order to compare the effect of flour with that of lean beef.
"During the second period I found the diet begin to disagree with me -, I lost my appetite, and was seized with severe head-achs, with uneasiness at my stomach and bowels, and great part of the tallow passed through my body assimilated. I was thirsty, and greatly troubled with wind, upwards and downwards. I also at this time observed a considerable increase in my urine.
Having been extremely uneasy during the night of the second of December, and having no appetite for food on the morning of the  third, I thought proper, though my appetite returned in the afternoon, to abstain from food the whole day, and next morning was quite well.
Suspecting that the bad effects of the preceding diet were owing to the quantity, and not the quality of the tallow, I diminished the quantity during the last period, and had then the satisfaction to find the diet agree with me perfectly well. My bowels were quite easy, and I was not troubled with wind, with thirst, or with head-aches, and no part of the tallow remained undigested."
Over Christmas of 1769, Stark enjoyed a diet of flour and marrow oil.
"I found myself remarkably well on this regimen, and thought my spirits raised by it ; though this might be only opinion, as it is difficult on such Subjects to distinguish between fancy and reality. I sometimes had desires. Venus semel, during the first period.
Finding the oil of marrow so mild in the bowels, and at the same time so agreeable a food, I increased it".

After trying suet again, he notes "Is it not evident, then, that an excess in the use of oils, is more hurtful to the body, than an excess in any other article of food ? and that, of course, we ought to be particularly careful in regulating the quantity and quality of the oils we employ in diet."

Remember those words. On February the 4th 1770 Stark began a diet of bread and honey, which caused him considerable internal distress, then followed it with bread and 4oz Cheshire cheese for 2 days. This left him "feeble, uneasy, sighing and moaning". He wrote,
"Does not an excess in sweets give a still greater shock to the constitution than an excess in fats? Is there any other article of food so hurtful as either, taken immoderately?"
He took his last meal, of bread and rosemary tea, on the 18th February 1770, while a hurricane raged outside.

The doctor who attended him wrote "For several months before his death he had been employed in making experiments upon himself, of the effects of different kinds of food ; among the last was that of honey and flour made into a pudding, upon which he had lived several days, and which seemed to be extremely diuretic at first, as he made considerably more water than the liquor he drank. At last it brought on a diarrhoea, for which he ate Cheshire cheese, to the quantity of a quarter of a pound, without any other food, and that seemed to bind his body so much that he had not been at stool for five days. When he was taken ill, on Sunday, the 18 th of February, 1770, he sent for Mr. Hewson to bleed him, when he complained of his head and in his belly. The blood was somewhat fizzy."

William Stark died on the 23rd February 1770. His friend James Carmichael Smith, who became Physician Extraordinary to the King, posthumously edited his papers into this 1788 edition. It includes many pages of statistical tables recording his observations.
Stark even measured his perspiration in the last days of his life. 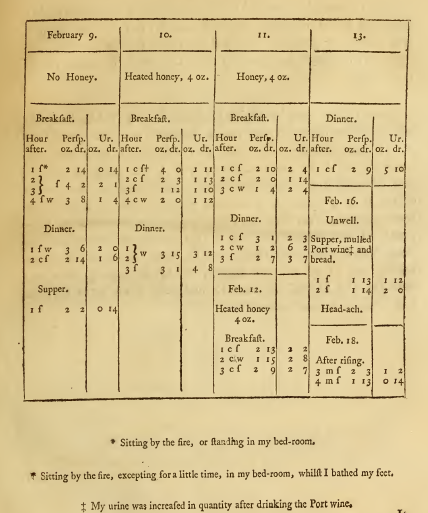 Stark's death is attributed to scurvy, as can be seen by the restorative effect on his health when his diet included meat or fruit, but that's probably not the whole story. He proved to my satisfaction that you need to watch what you eat if you want to stay alive; that animal foods are a blessing, and that, if you wish to continue in desire and keep your teeth, beware the grains and sugars, and be particularly careful in regulating the quantity and quality of added fats and oils.

Email ThisBlogThis!Share to TwitterShare to FacebookShare to Pinterest
Labels: The Tragedy of William Stark

This is utterly fantastic - a comic tragedy if ever there were one - way better than any FFQ epidemiology nightmare, and I would love to see it made into a movie.

Absolutely.
I can think of one film with a slightly similar theme.
https://en.wikipedia.org/wiki/Woyzeck_(1979_film)

I bet a biography of George H. would be equally interesting

"...no part of the tallow remained undigested."

It almost sounds like he may have been celiac, as steatorrhea due to damaged intestinal lining is a classic symptom of celiac disease.

is the world ready for a 2nd Kinski?

consider too, that if Stark was suffering from scurvy, this would make him deficient in carnitine and impair the metabolism of long-chain fats. However he was able to tolerate marrow oil with bread; this would seem to rule out celiac. Bread would have more vitamins than flour, by a small margin, due to yeast.

a description of the things I have eaten and their effects would be an equally gruelling read.

I note that there could be some vitamin C in bone marrow, traces of which may have been carried into the oil which was extracted at low heat.

However no vitamin C was found in reindeer marrow

The consumption of carnitine, creatine, hydroxyproline and other carnochemicals requiring ascorbate for synthesis, found in meat, seems to relieve scurvy as well as ascorbate does.

Kinski was... unique, had a very short fuse. Some would say he was an eccentric asshole. Watch documentary on "Fitzcarraldo". Natives offered director to kill Kinski.

'seems to relieve scurvy as well as ascorbate does'

that sort of endorses the simple idea that you should eat skin to make your skin and hair healthy, heart for your heart and so on through the various organs.

Eat toenails for healthy nails, and if you want decent sperm then...

And for your ears, eat wheat.

Have you seen this?

Looking forward to your perspective.

These are patients who already had liver cancer which had been treated. That's a small minority of people with Hep C.

The number in the study was small, but it's indeed feasible that removing the virus will depress a hepatic immune system accustomed to being stimulated by it - this is why scarring heals after treatment.

In fact, lowering the viral load and associated inflammation as much as possible with a dietary intervention first seems a pretty good way to minimise the shock of DAA treatment on the immune system.