Gene-diet interactions and the risk of colorectal cancer

There's nothing like a bit of cognitive dissonance to get the brain working if you steel yourself against the instinct to invoke protective stupidity. It's much like Marx's internal stresses of capitalism (or communism for that matter), awareness of contradictions may be the birth-pangs of the next state of existence/awareness, or it may just be the subconscious motivation for repression and consequent dysfunction (it's uncanny how Marxist and Freudian terminologies overlap here, but I digress).

When you join the keto cult, first you have to overcome cognitive dissonance just to entertain the idea that eating high fat can do you some good, and try it. God knows that's hard enough, well done everyone. But that's the beta effect (short term results); what about the alpha effects, i.e. longevity and disease resistance? We know risk markers improve, and why do we have risk markers? Because doctors prefer to diagnose diseases from blood tests, and not your stories about what you had for dinner. Your lipids, BP. HbA1c are measured with considerably more accuracy that saturated fat ever was in any FFQ, so if you have to trust epidemiology trust biomarker epidemiology, and get with the lipid triad and LMHR news over at cholesterolcode.com.

And as for saturated fat and cardiovascular disease in epidemiology, read em and weep saturophobes - latest, biggest meta-analysis the other month, very good methodology, and SFA is beginning to look just a little bit protective.[1]

Cancer though - doesn't that have a biodiversity that's harder to predict than a metabolic disease? Well, most of the common cancers, including colorectal cancer, have a very strong, Bradford Hill strong, association with hyperinsulinaemia (and/or the IGF1/IGFBP3 axis), and we've taken care of that. But still - you read papers where processed meat (way too heterogenous a set of stuff to combine as if it were homogenous, but nutrition epidemiology is what it is, a very blurry snapshot that you need to squint at hard to see anything at all really) is mildly associated with CRC but unprocessed meat isn't, or vice versa, or only in one sex, or in the other, etc etc etc and wonder if there still could be anything in it.
If nothing else, it's good for refuting accusations of orthorexia,

One tool I've found recently that seems to let you look a bit more closely at the murk is the epidemiology of gene-diet interactions. It still doesn't tell you if residual confounding is at play, but it does let you see the spread of association in a population and can help to validate plausible mechanisms, another Bradford Hill criteria. One thing that impresses me is that it's rather full of null results. Dietary patterns are baloney, so they have no interaction with any genes associated with BMI in this Chinese-Singaporean population, (study pulled at random, fairly typical so far of this sort of question). Interestingly there's an interaction with cholesterol, which seems like the opposite of what's happened in the West, maybe just the diets of the wealthy in Singapore, but there it is.[2]

So anyway, to the subject in hand - I looked up gene-diet interactions for CRC and it turns out processed meat (I know, I know) is the only one in this large pooled case-control study.
Genome-Wide Diet-Gene Interaction Analyses for Risk of Colorectal Cancer.[3]


Our results provide strong evidence for a gene-diet interaction and colorectal cancer risk between a genetic variant (rs4143094) on chromosome 10p14 near the gene GATA3 and processed meat consumption (p = 8.7E-09).

Now, this gene has nothing to do with nitrate metabolism as far as I can see - it seems to be a cell proliferation gene. So we could still be seeing residual confounding, because there's no absolute way to adjust for the huge effect of hyperinsulinaemia on this cancer and processed meat is what you have on a pizza or in a sandwich. And the people who clean up chemical spills for you are unlikely to be vegan and/or rich, so processed meat is kind of their thing. But still.

The study wasn't designed to implicate carbs, by the way (but the fibre results will be interesting)

Of the 7 studies listed here, the association goes the other way in 2 - NHS and HPFS. This helps to validate it according to my bias, which is that NHS and HPFS are the last place to look if you want results that correspond to reality.
If, on the other hand, you love Harvard epidemiology, then eat more bacon (I know, I know). 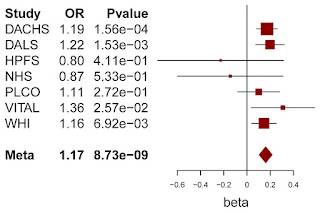 There are 3 significant loci and they all have positive interactions. Nothing good.

And here's the spread. This stuff interests me:


Only 6% of these populations had TT, most people had GG. So all the risk is in one corner. (you could get tested for this these days, but who knows what other genetic factors also influence it at the personal level).

What about red meat etc?


With the other dietary factors evaluated, no interactions using the conventional case-control logistic regression analysis reached the genome-wide significance threshold.


So I dug down into the supplementary data and found this amazing table.

If you have the most significant interactive allele for red meat, you get a 10% higher cancer risk if you don't eat enough. If you have one of the other 2, you get an 11% increased risk from too much.
And look at fibre - it's pretty much the same.
This helps to explain the Polyp Prevention Trial, doesn't it?[4]
I've long suspected that something like this goes on - that null or near-null results can disguise a mild 2-tailed effect - a little extra harm in one corner of the population and a similar-sized protective effect in another.
If any of this is real - insulin is, as always, the elephant in the room, as are the true carcinogens, which you'll find in the storeroom. But surely it has a bit more validity than the naked FFQ epidemiology it's based on?

Anyway, this seems like a useful reality check, and there are others - does the epidemiology of bowel movements support the motility part of the fibre hypothesis? Not really.[5] Does the epidemiology of aspirin (a drug that notoriously leaches blood into the gut, even when vegans take it) support the heme iron hypothesis? Not really.[6] Maybe this seems like nonsense to some, but if people want to draw drastic conclusions from FFQ epidemiology, they need to get outside the box more.

Oh, and why do people want to draw drastic conclusions from FFQ epidemiology anyway?
Adam Curtis has the best take on how this happened here.

What do you think of Roy Swank's limiting saturated fat to cure multiple sclerosis. I know Denise Minger talks about it in her low fat article. I have an autoimmune disease and can't find a problem with that study. what is strange is that at the 20g saturated fat mark, patients get worse significantly, and it is not gradual. Additionally, it seems that meat and dairy centric populations suffered more autoimmune diseases in his time. What am I missing?

Thank you so much.

Meat and dairy eating populations have more MS because they get less sun exposure - they are foods more essential in colder climates
https://www.ncbi.nlm.nih.gov/pmc/articles/PMC169645/

Limiting SFA and carbohydrate interaction makes sense, but there is always more carbohydrate than SFA to replace in the usual diet.
https://www.ncbi.nlm.nih.gov/pubmed/21978979/

And in the opposite camp to Swank, Minger

I was wondering about your thoughts on this study: https://diabetes.diabetesjournals.org/content/63/7/2356 in regards to a person trying to gain mass and muscle. It seems that in specific circumstances of overfeeding, SFA actually worsens lipids and increases fat gain vs. PUFA by a significant amount. It seems the PUFA group gained almost 3x more muscle in the same amount of weight.

Thanks so much,
Dave

It's an overfeeding study in the context of a high-refined carb diet, which will block oxidation of the SFAs. There would have already been a high level of MUFA and PUFA in both diets, so it's not a test of replacing PUFA with SFA. It's unlikely the lean mass change was large, and 3x a small effect is still a small effect (2% increase(. The liver fat changes are small and, critically, THEY DID NOT SUPPLY LIVER ENZYME DATA. ALT is not mentioned at all.
The results can be explained by PUFA being converted to cholesterol in the liver, removing part of the energy. Is this desirable? It causes gallstones in animals.
I would expect it to increase inflammation, which may be why ALT was not reported.
Here's a thought experiment - instead of overeating fat-soaked muffins, try overeating protein for 7 days, then see if lean mass increases or fat mass goes down.