Virta Health vs Seidelmann - of ketones and COVID-19

You would have seen this paper; senior author is Sara Seidelmann of the infamous "low carb kills" paper, the reviewers were one vegan propagandist David Jenkins (a friend of the family, so to speak) and an Iranian prof with a decent publications list in the plant-based area - neither with any infectious diseases expertise.

There were 568 COVID-19 cases and 2316 controls. Among the 568 cases, 138 individuals had moderate-to-severe COVID-19 severity whereas 430 individuals had very mild to mild COVID-19 severity. After adjusting for important confounders, participants who reported following ‘plant-based diets’ and ‘plant-based diets or pescatarian diets’ had 73% (OR 0.27, 95% CI 0.10 to 0.81) and 59% (OR 0.41, 95% CI 0.17 to 0.99) lower odds of moderate-to-severe COVID-19 severity, respectively, compared with participants who did not follow these diets. Compared with participants who reported following ‘plant-based diets’, those who reported following ‘low carbohydrate, high protein diets’ had greater odds of moderate-to-severe COVID-19 (OR 3.86, 95% CI 1.13 to 13.24). No association was observed between self-reported diets and COVID-19 infection or duration.
you'll find good criticisms in the rapid responses attached, and my PubPeer comment here.

The methods state
Lastly, we combined ‘low carbohydrate’ diets and ‘high protein’ diets into another category (‘low carbohydrate, high protein diet’, n=483) to evaluate whether these dietary patterns are associated with COVID-19 severity.

Why? No reason is given for combining these 2 categories.
There was a keto option, so why didn't they add keto + low carb?

Perhaps keto had less that 100 responses? But there was no registered protocol, those decisions were post-hoc - even if keto had fewer than 100 responses, adding it would have still increased numerical power, which was presumably the point of combining categories as they did. And there's nowhere it says how many responses, and we also have no way of knowing how similar low carb and high protein really were (everything was pretty similar really, these were for most respondents just the virtue-signaling labels they gave to their eating habits).

Anyway, there was no association once people with a negative or no PCR test were excluded.
That's not in the abstract.

But, you know, people are using the keto and LCHF diets to treat diabetes and reduce COVID19 mortality associated with type 2 diabetes, MetSyn, or obesity, so this is a nasty thing to say if it's not true. It's a bit like trying to get people to stop taking vaccines based on your bias and some shit you didn't understand.

Fortunately Vitra Health have ridden to the rescue with a survey of their own T2D population on a ketogenic diet. We know these people are actually following the diet, or adhering closely to it. 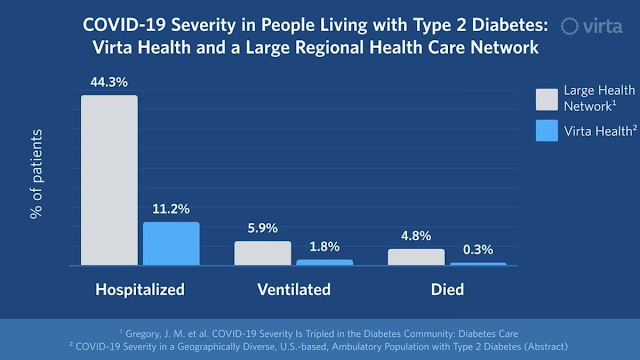 The abstract (presented at an ADA conference) is
COVID-19 Severity in a Geographically Diverse, U.S.-based, Ambulatory Population with Type 2 Diabetes on a Medically Supervised Ketogenic Diet
Data were obtained from medical records and from surveys sent to T2D patients who self-reported COVID-19 diagnosis; 47.8% (294/614) responses and one known COVID-related death yielded a sample of 295 (50% male, 54±9 years, across 41 US states). We observed low reported rates of hospitalization (10.9%), ventilation (2.0%), and death (0.3%) relative to national reports.
Let's compare with the Seidelmann paper - 1) we know the diet is real. 2) COVID-19 is self-reported (some will have tests some not, as in Seidelmann) but - we do have people being hospitalised, unlike Seidelmann, and we even have one death, so Virta are able to capture events that people weren't able to report directly, because their model includes liaison with primary providers likely to report deaths to them. 3) the event rates are low for a population with type 2 diabetes, as shown by the comparison with this population. The populations, though much the same age, aren't identical, but the biggest difference seems to long term inclusion in the Virta Health population (note the "baseline" HbA1c data in Virta - before treatment with the ketogenic diet - is similar to the overall HbAic data in the comparator vs standard practice, but many of the Virta Health population have put their T2D in remission. At this stage, we have to say that the EFFECTS of the keto program are protective - weightloss and euglycaemia, etc. We don't have evidence that keto per se is protective apart from those factors. But that may well be hidden in the data, once the whole set is fully written up. But once again, it looks like Harvard is a bad actor, an ill informant in the nutrition-and-health space, interfering with effective treatments to preserve its own ill-gotten (by a process of bloviation if not graft) dietary hegemony.