Where did the Butter go?

How did people in the 1940's and 1960's manage to eat that much butter? I've tried, and I can't do it, even on LCHF. And people back then didn't have French cookery books, Julia Childs was still working for the OSS (she didn't appear on NZ TV till the late 1980's, after Kiwis started drinking wine).

Wikipedia’s entry on “New Zealand Cuisine” notes that “Scotland provided the largest number of British ancestors of today's Pākehā. The Scottish legacy on food could be seen through a traditional preference of sweet foods, and a wealth of baking dishes to celebrate important occasions, reflected through cakes, scones, muffins and other mainly sweet baking dishes. The country's most iconic recipe book, the Edmonds Cookery Book, originally began as publicity material for a baking powder company, and contains a high proportion of baking recipes”.

Rationing of sugar and butter in the late 1940s affected this culture of baking in particular; recommendations for substitute shortenings (using lard or dripping) were published, but there was little that could substitute for sugar.

The 1940 per capita butter consumption figure was dropped in October 1943 from 415g/week to 227g/week (8oz) by rationing (today’s per capita consumption 112g/week), and Kiwis were advised to use dripping or lard as shortenings in place of the missing butter. Coal miners, saw millers, bush workers and freezing chamber hands were granted an additional 4oz/week after vociferous protests. Fresh pork, needed for US Army rations, became unavailable and meat was limited to 1.13kg/week in 1944 but fatty offcuts such as lamb flaps, as well as offal, were exempt, and meat rationing ended in September 1948. Poultry, milk and fish were not rationed, cheese and eggs were only rationed in some areas, and wages and employment increased as a result of the war.
“Butter consumption in New Zealand fell, as a result, from 48 lb a head in 1942–43 to 36 lb a head in 1944–45 and 31 lb a head in 1945–46.”
For comparison, the latest (2012) New Zealand butter consumption figure is less than 13 lb a head; in the USA, 5.6 lb; in France, 17.6 lb.
Sugar was rationed from April 1942 to August 1948, to 340g/week (12oz) – almost 50g/day, with an extra allowance in the jam-making season, for a reduction in consumption of 10,000 tons per year.[i] (Possibly treacle was not rationed, but there were shortages of all imported consumables after 1939 - wartime rationing in NZ was about shipping, not production.)
Tobacco, sweet biscuits and confectionary were often in short supply during the rationing years. Petrol was rationed between 1939 and 1950.
In 1972, John Yudkin used this graph to illustrate how wartime rationing reduced sugar consumption in the UK, corresponding to decreases in IHD incidence. 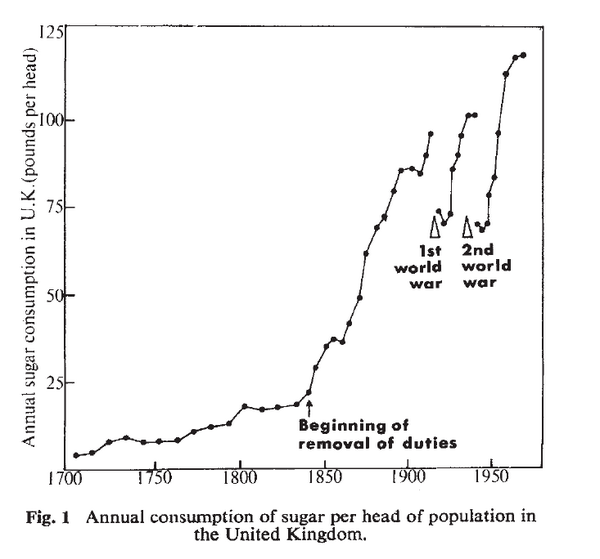 I've seen the baking effect for myself. My family of four normally goes through 450g butter and 150g sugar a week. But a few years ago the daughter took "food science" at school. For the first year she was taught to make confectionary with artificial colours and flavours plus special effects. Then she learned to bake. What is it with schools, hospitals, and nutrition?
On the weeks she experimented with baking at home (she eventually baked the best cheesecake I've ever tasted, so props to her) the butter supply was likely to run out before shopping day. Not to mention the sugar disappearing like there was a hole in the bag. Don't get me started on the eggs.
So there's your high-saturated fat, high-cholesterol diet, such as kiwis enjoyed in the peak heart attack years.
It's all kind of adding up.

Email ThisBlogThis!Share to TwitterShare to FacebookShare to Pinterest
Labels: Where did the butter go?

Well, that's easy, really. I used to put about 100g a day in tea - salted butter tea. This is a habit from long before LCHF days, owing to a protracted stay in Nepal very long ago. I Don't do it every day now, but still most days. I also manage to down around 300ml of cream in coffee most days.

I think today most butter still ends up in home baking. Certainly I use it for repeated requests for a chocolate 'cake' I make for my wife's work place. I use Andrew Schloss' "one-pot cakes" recipe called "triple bypass" using 5 eggs, a pound of chocolate, and 1/2 a pound of butter and no flour. I think they have no idea how much fat is in the 'cake'. He has an updated version in a new book that calls for cream instead of butter, but butter is way cheaper than cream. :)

That last point really amazes me, that butter costs about half, measured by fat content. Best value dairy food by far.

I bet they used so much butter because they cooked with it. I came across some old-time practices of cooking during my early life. Some old people turned butter into a rendered butter fat because it could be kept unspoiled longer and was more practical for cooking. Butter is an emulsion with a lot of water. Weight of a rendered butter fat is approximately 2/3 of the initial weight of a butter.

the annual totals probably include a lot of special holiday cooking, too -- my grandmother's famous toffee recipe calls for a half-pound per batch, and a batch makes about two christmas-presents'-worth. :-)

Good point. As I remember, the introduction of tupperware to NZ (1973?) was associated with a lot of baking, which was used as a filler to show off the new purchases.
However, U.S. butter consumption never came near the NZ level; we had this stuff every day.