The state of nutritional science, 2016

Someone sent me a link to this paper the other day, it's not something I would have looked at otherwise. However, next time you read a "totality of the evidence" snowjob supporting guidelines on saturated fat consumption, this paper will probably have been thrown on the pile, weighting it a little bit further.

This was a complicated and expensive piece of work, with no obvious COIs:
The work presented in this article has been supported by Science Foundation Ireland http://dx.doi.org/10.13039/501100001602 (grant SFI PI/11/1119). The CORDIOPREV and LIPGENE study subjects and investigators were funded by European Commission FP6 (grant FOOD-CT-2003-505944).

So has it been designed in such a way that it can tell us anything reliably about the effects of fats in human diets?

- The mice are C57BL/6 so get fat on diets that may not fatten humans,[1] and the diet is 45% fat, 35% CHO which is half sugar, plus casein. Trisun oil vs Palm oil used means PUFA was well-controlled. However, it also means we're looking at a particular type of SFA - palmitate and stearate - versus the generic MUFA oleic acid that's prolific in every fat, even the palm oil here.The mice fed more MUFA gained less weight than the mice fed SFA. Is this plausible? It's consistent with Delaney et al (2000).[2] However, this same evidence would predict that, had the SFA source been coconut oil, then the SFA mice would have gained less weight than the MUFA mice.

- SFA/MUFA intake of first human cohort (CORDIOPREV) is determined by plasma levels, which evry ful kno are controlled by CHO,[3] and this is clearly shown in supplementary table 3 where plasma SFA correlates with triglycerides but not HDL. Therefore, CORDIOPREV shows effect of CHO intake on IR as well as or instead of effect of SFA intake. It is well-known that sugar and SFA consumption are associated in epidemiology, and that is the likely explanation for what we see in supplementary table 3. 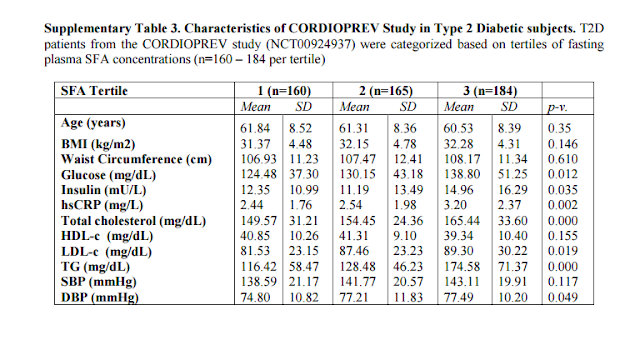 - Second human study (LIPGENE) compares effect of MUFA intervention in high-SFA people living in Scandanavia with same intervention in high-MUFA people living in Italy. Again, SFA/MUFA was determined by plasma levels. Even apart from this, I think there could be a few confounders within this arrangement that were not discussed in the paper. Results are shown in supplementary figure 6 here.

Interestingly, there is no discussion whatsoever of limitations vs strengths of the research in the paper.

Does this mean the results are wrong? Many studies show that MUFA is associated with better insulin sensitivity than SFA in high-carb diets, but the difference seems to disappear at higher fat intakes.
[Edit 1/4/16: the science for this is much less convincing than I was given to believe. Most studies show no difference. The KWANU study only showed a non-significant difference which disappeared at 47% fat. The effect is only seen in humans, when it is seen, with differences in fat type that are outside the normal range obtained in people freely choosing fatty foods, in other words at the same extra-physiological concentrations of the various fatty acids that are produced in the mouse studies.]
The mouse study "demonstrated that enrichment of obesigenic HFDs with MUFA can improve insulin sensitivity, reduce adipose IL-1β–mediated inflammation, and promote adipose hyperplasia compared with diets enriched with SFA". Promoting adipose hyperplasia might not be something everyone wants. A possible explanation is that more fat storage in subcutaneous adipose tissue (and somewhat higher rate of oxidation) from MUFA in the obesigenic diet results in less visceral and ectopic fat - the former (VAT) is more inflammatory than subcutaneous fat, the latter (ectopic fat in liver and pancreas) results in insulin resistance and type 2 diabetes.[4] But because of the mouse model used, this doesn't answer the question, what is an obesigenic diet in humans? The C57BL/6 mouse can't tell us what happens in humans if MUFA replaces carbohydrate instead of replacing SFA, but we have human studies showing that, e.g.[5]

Email ThisBlogThis!Share to TwitterShare to FacebookShare to Pinterest
Labels: 2016, The state of nutritional science

It makes you wonder if they decide the outcome and then design the study to achieve it.

Yes, plainly in that case the outcome was anticipated so well that the experiment was no longer designed to test it.

Although MUFA is usually productive of better insulin sensitivity this is not always the case.

Pregnancy is a state in which insulin resistance is natural, but in gestational diabetes it has become over-loaded by the anti-insulin hormones of pregnancy in those at risk of type 2 diabetes.
In this condition SFA (butter) with a meal (bread and low-fat cottage cheese) improves glycaemia more than MUFA (olive oil) does.

"The area under the curve showed a significantly lower glucose concentration for SF meal (p = 0.001). Serum insulin concentrations followed the glucose response with the peak at the 60-min time point and a significantly lower concentration at the 180-min time point in the SF than in the MUFA group. The present study demonstrated that the addition of SF to the meal resulted in lower postprandial glucose and insulin than when the meal contained MUFA. Thus, SF may be useful in controlling postprandial glucose."

When you have two diets from different companies, it is no longer science - real science controls every variable possible - the base feed would need to come from the same batch. There is also wide variation in the content of oils. (different poly phenols etc.. )

The type of sunflower oil they used claims to be only 9%LA (if you believe them) - similar to palm oil. The total would be about 14%LA

To do this research correctly, they would have to add chemically distinct MUFA and SFA. Of course you need error bars etc as well..

Sad to see so much research money wasted.. Lets say the paper is mostly correct - then eating a bunch of MUFA induces insulin sensitivity - so people can't lose weight - and get ever fatter?

The idea that the cause of T2D is a problem with insulin sensitivity is wrong - when people are over weight they NEED insulin resistance to lose weight - and should be until the excess fat is gone. T2D is a symptom of obesity - not the cause.