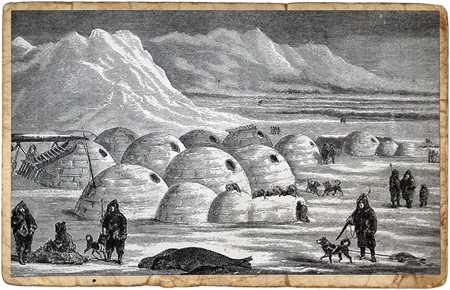 Hyperlipid wrote an interesting post a while back about the Inuit, and how a genetic mutation means that many of them are never in ketosis even eating a very low carb diet. Basically, the mutation ensures that low carb brain metabolism runs predominantly on glucose, not ketone bodies. Because similar mutations are common in other populations dependent on low carbohydrate seafood diets, it must be a valid alternative to ketone metabolism in these populations.
But what really interested me is that not everyone has the mutation. Natural selection has kept the Inuit’s options open. Should the population meet conditions under which the mutation is a handicap, the race will continue. And there is something very human about this. I doubt you will see a comparable variation in bowerbirds, for example. Humans are the acme of long-term survivalists, retaining a diversity of metabolic variations rather than developing a single, fiendishly clever, niche specialisation. There are humans that make vitamin D from very little sunshine (but are highly vulnerable to burning solar radiation), and humans that make D slowly (but are largely immune to sunburn). Our ancient and modern population movements and interbreeding have increased this diversity in any given place, but the Inuit demonstrate that there is something innate about it. It gives us what Nassim Nicholas Taleb memorably calls “antifragility”.
Now consider the genetic propensity to insulin resistance and type 2 diabetes. At the genome level this is expressed in more than one way (as are the carnitine mutations of the Inuit type). The result of becoming insulin resistant is the glucagon dominance of hepatic metabolism. Glucagon wants to rip fat and protein into ketone bodies and glucose. In type 1 diabetes this gives you diabetic ketoacidosis (systemic acidosis triggered by a toxic brew of hyperglycaemia and hyperketonaemia) and the wasting of fat and protein reserves, but when dietary carbohydrate, or perhaps any food, is unavailable this glucagon dominance is the means of survival. Those individuals who become keto-adapted easily – those who become insulin resistant quickly – have an advantage. These are the strong ones in lean times (and as humans are social animals, they can help the others survive). But in the interests of anti-fragility, human evolution also favours some individuals with extra amylase gene copies (just a copy, the low-hanging fruit of evolution) and insulin sensitivity. These individuals can become strong when starchy foods are plentiful, and will survive longer when animal foods are unavailable.
Let’s say you’ve descended from the insulin-resistant line (perhaps also exposed to accidental insults I haven’t mentioned, such as toxins or pathogens colliding with your metabolism, or unlucky micronutrient scarcity). The diabetician tells you that your high FPG and HbA1c are down to your genes. This has two meanings – the good news is that your personal behaviour didn’t result in your diagnosis (although in fact the odds are it has had some bearing on it), the bad news is that there is little you can do to prevent what is a progressively deteriorating condition (although we will prescribe a high-carb, high-fibre, low-fat diet that will make it worse, and drugs that won’t cure it).
Whereas what this diagnosis should mean is this; you have glucagon dominance. You have a genetic adaptation to a diet low in carbohydrate but high in fat and protein, with periods of fasting. If you go with the flow of glucagon dominance, if you feed yourself on the foods that are glucagon metabolism substrates and avoid the insulin metabolism substrates, and if you go hungry some of the time, you will likely get better. At any rate, you won’t have a deteriorating condition that will eventually take a ton of drugs to control poorly.

This is a great explanation of what is wrong with me, thanks. It gives me hope that maybe I'll be OK and not get progressively worse. Four years eating low carb and hanging in there. So far, so good.

Thanks. that was exactly my intention -- it's a heuristic, it's way over simple, but it's as close as I can get to the nub of the problem.
I intend to expend it further - there are indications that feeding the glucagon dominated hepatic metabolism fat and protein can tame it, and that feeding it high carbohydrate low fat can make it worse, sometimes even when insulin sensitivity improves.

Do you know if there's any data on the specific aminos that have highest glucagon stimulating activity in humans? I can only seem to find it in dogs, sheep, and rats.

All the human studies are focussed on whole foods and proteins mixed with carbs, but I want to know which aminos are specifically involved.

According to the dog study and this breakdown, it looks like this:

Asparagine is sourced from "dairy, whey, beef, poultry, eggs, fish, lactalbumin, seafood" (and some plant stuff that IDGAF about), I think we're all up to speed on glycine (the gelatinous bits of animals), and from there in reducing amounts down the line, but not too much.

I'm trying to wrangle the nutritiondata website to see if it's possible to display foods highest in several aminos, just for shits n giggles it'd be fun to see which food is best bang-for-buck glucagonically speaking. I'm going to guess it'll be something like pork rinds or shark fin or ox-tail...

There's also GHB which is an isomer to ketones (and found in wine and beef etc) which is good for glucagonic activities. :p

One study demonstrates "among the plasma amino acids, tyrosine .. and methionine .. were most closely related to the plasma glucagon response".

Methionine is in eggs, fish, chicken, and stuff.

The neutrality of the BCAAs is fascinating. These are specific liver substrates not metabolised elsewhere and fuel hepatic metabolism when not used for GNG and KG - maybe that's the reason they're neutral. They're freewheelin' spirits bound by no hormonal rules. Also (or because), they are sources of propionate.
http://www.ncbi.nlm.nih.gov/pubmed/12450897

The BCAA part jumped at me, too. From Phinney & Voley, Low Carb Performance:

In Steve’s keto-adaptation experiments in cyclists[6], circulating BCAA rose significantly during the ketogenic diet compared to their levels during the baseline high carbohydrate diet. This occurred despite the fact that both diets contained the same amounts of protein. BCAA oxidation typically increases in proportion to energy demands. In keto-adapted athletes, however, there appears to be less need for muscle to use BCAA as fuel, perhaps because the BCAA and ketones have similar ‘carbon skeletons’ and thus the ketones are burned in place of the BCAA. This was effectively demonstrated by Steve’s follow-up study showing that the higher blood leucine levels were a result of markedly decreased leucine oxidation. This finding is consistent with prior work in diaphragm muscle showing that BOHB inhibits the oxidation of leucine[25]. Blood leucine, which increases on a ketogenic diet, is known to be a potent regulator of muscle protein synthesis. Insulin, which decreases on a ketogenic diet, has a permissive role in promoting protein synthesis. Unaware of this counterbalancing effect from increased leucine levels, critics of low carbohydrate diets assumed that reduced insulin levels would cause muscle loss. However the net effect of nutritional ketosis from a well-formulated low carbohydrate diet is at least maintenance of lean body mass despite a much lower insulin level.

"In particular, valine and leucine/isoleucine levels have been reported to be 20% and 14% higher, respectively, in obese compared with lean subjects.87 Mechanistically, this appears to be accounted for by a high rate of flux through the BCAA catabolic pathway (Fig 2A), resulting in the increased production of alanine. Because alanine is a highly gluconeogenic amino acid, increased BCAA catabolism may thus contribute to increased hepatic glucose output.87 Furthermore, the increased α-ketoacids generated by increased flux of the BCAAs through their catabolic pathways also potentially suppress mitochondrial β-oxidation."

And they reckon this alanine --> glucose shuttle is the meaning of pre-diabetic elevations in ALT - interesting.
http://www.medscape.com/viewarticle/492759